Linear Algebra deals with matrices. But that is missing the point, because the more fundamental component of a matrix is what will allow us to build our intuition on this subject. This component is the vector, and in this post, I will introduce vectors, along with common notations of expression.

We will talk about the normal vector, and its relation to a line, a plane, and ultimately, a hyperplane. We will introduce the idea of the dot product (though I’ll not be delving into it only in a later article).

It is very instructive to look at a single vector. Remember that our worldview is that a matrix is just a bunch of vectors. We will return to this point later.

The convention for defining vectors you will find in every textbook/paper is as a column of numbers (basically a column vector). We’d write a vector \(v{1}\) as:

The column vector picture is usually more prevalent. Usually, if a column vector needs to be turned into a row vector (for purposes of multiplication if, say, you are trying to create a symmetric matrix), you’d still consider it as a column vector, and use the transpose operator, written as \(v^T\).

Let’s talk a little bit about lines, surfaces, and their higher dimensional variants (hyperplanes) and their normal vectors.

Here’s a line \(6x+4y=0\). I’ve also drawn its normal vector which is \((6,4)\). Now, note the direct correlation between the coefficients of the line equation and the normal vector. In fact, this is a very general rule, and we will see the reason for this right now. 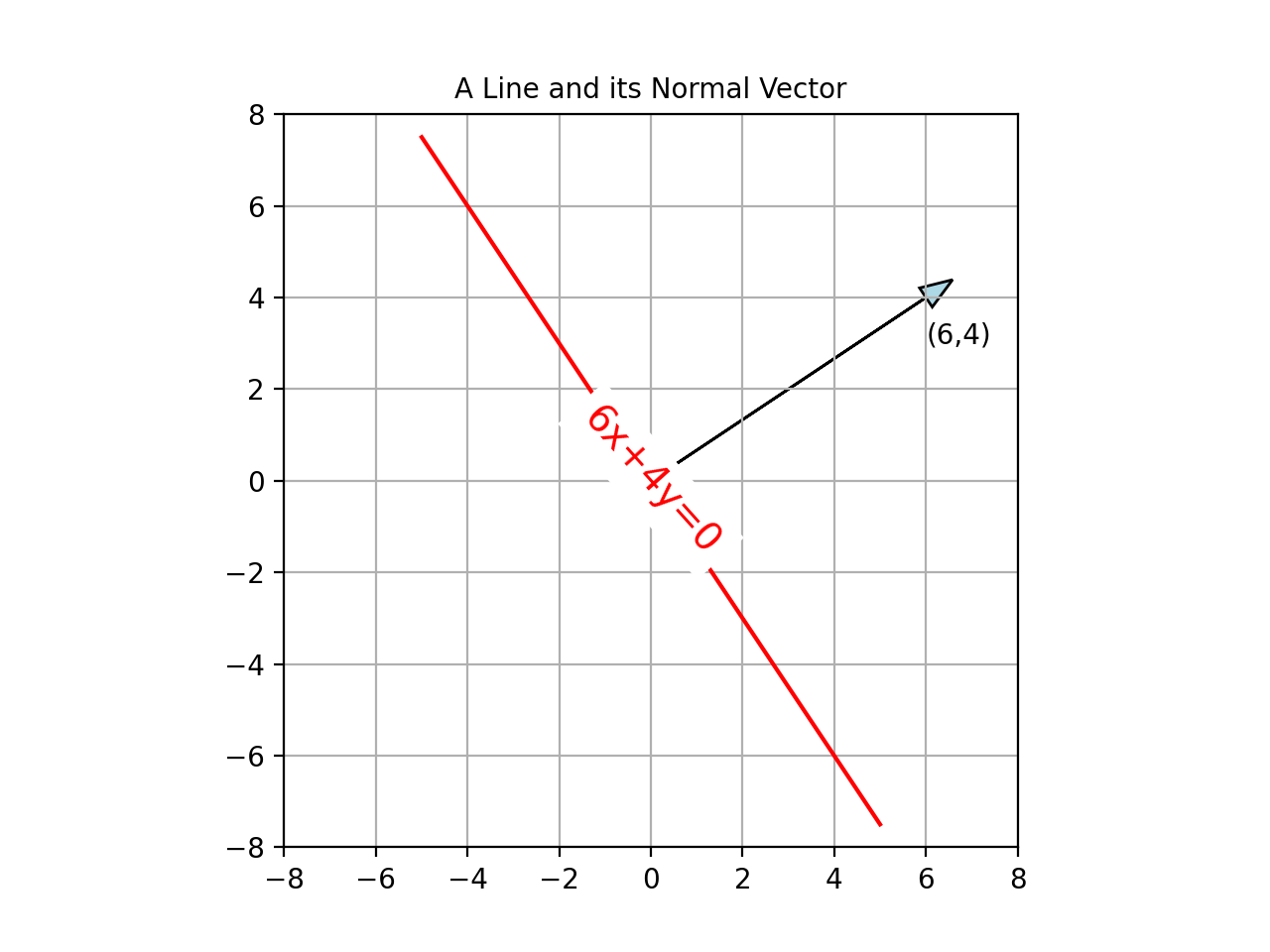 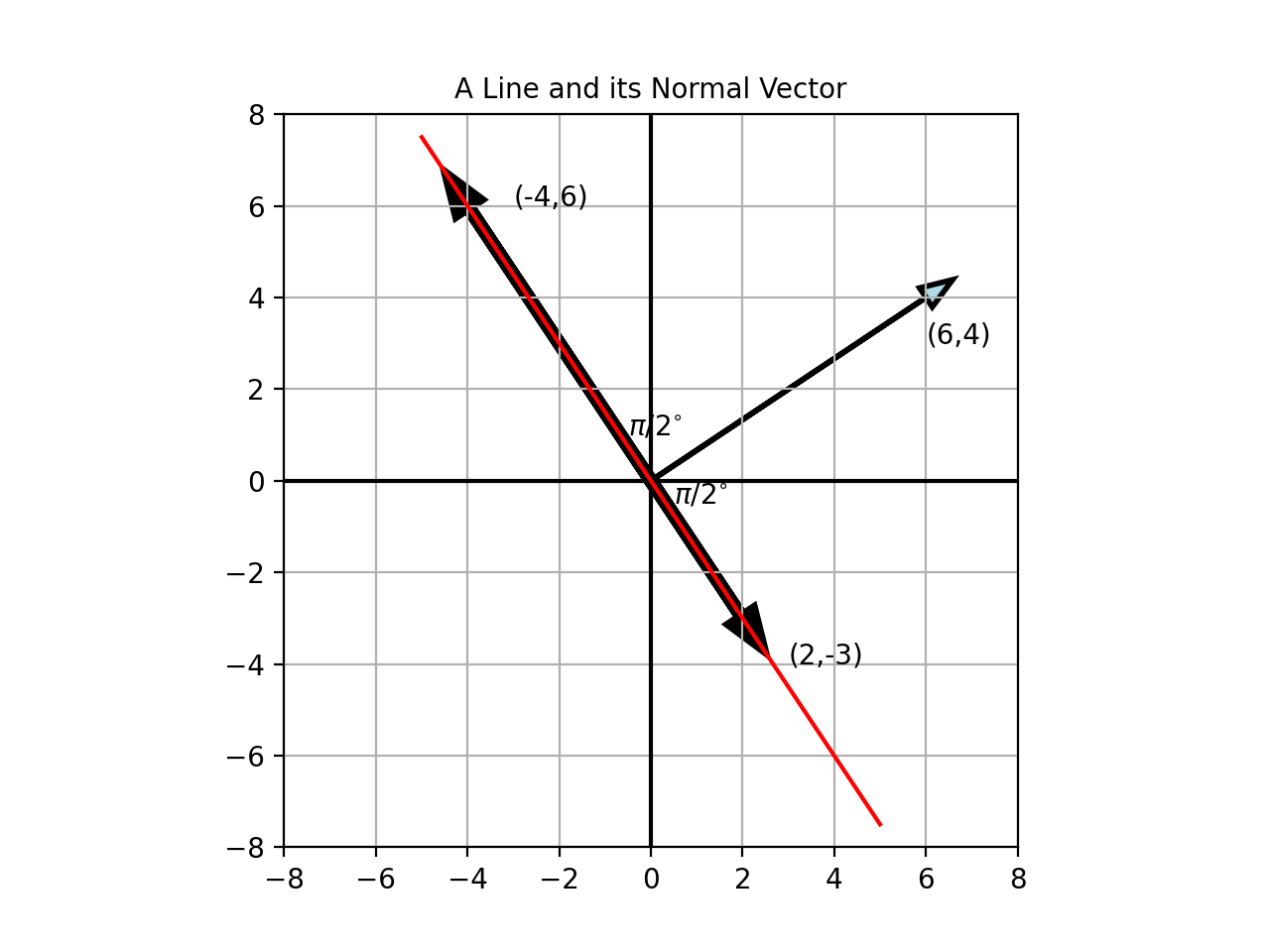 We haven’t talked about the dot product yet (that comes later), but allow me to note a painfully obvious fact, any point on the line \(6x+4y=0\), satisfies that equation. Indeed, you can see this clearly if we take \((2,-3)\) as an example, and write:

This operation of multiplying individual components of vectors, and summing them up, is the dot product operation. It is not obvious that taking the dot product of perpendicular vectors will always result in 0, but we will prove it later, and it is true in the general case.

Indeed, an alternate definition of a line is the set of all vectors which are perpendicular to the normal vector (in this case, \((6,4)\)). This is why a line (and as we will see, a plane, and hyperplanes) can be characterised by a single vector.

Quick Aside: There are alternate ways to express a line (or plane or hyperplane) using vectors which involve the column space interpretation, but I defer that discussion to the Vector Subspaces topic.

Let’s move up a dimension to 3D. Here we consider a plane of the form:

To make things a little more concrete, consider the plane: 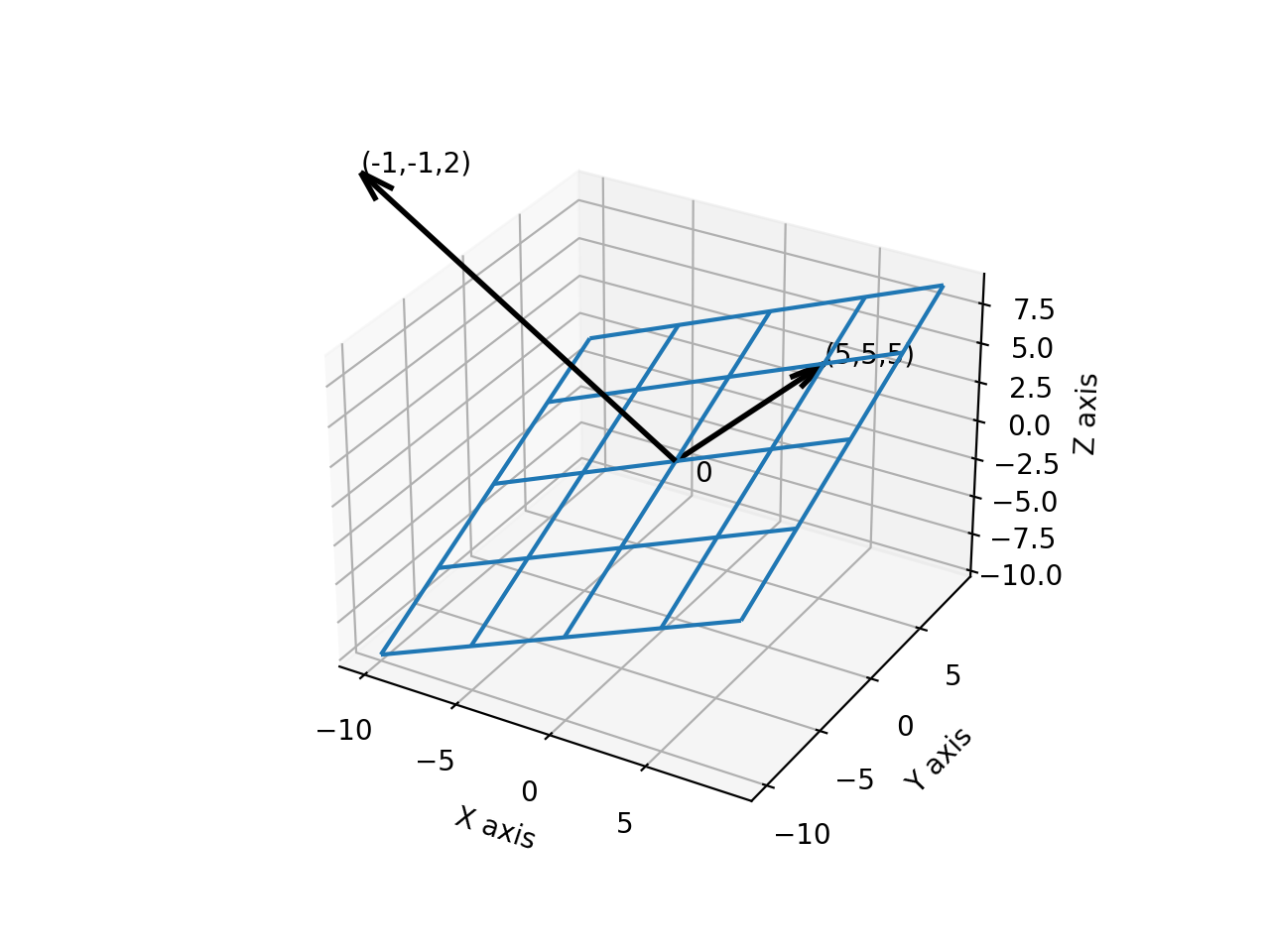 Do verify for yourself that this point lies on the plane. Also, as you can see, the coefficients of the plane equation form the normal vector of the plane. The same concept that applied to lines, also applies here.

The image below illustrates this idea. 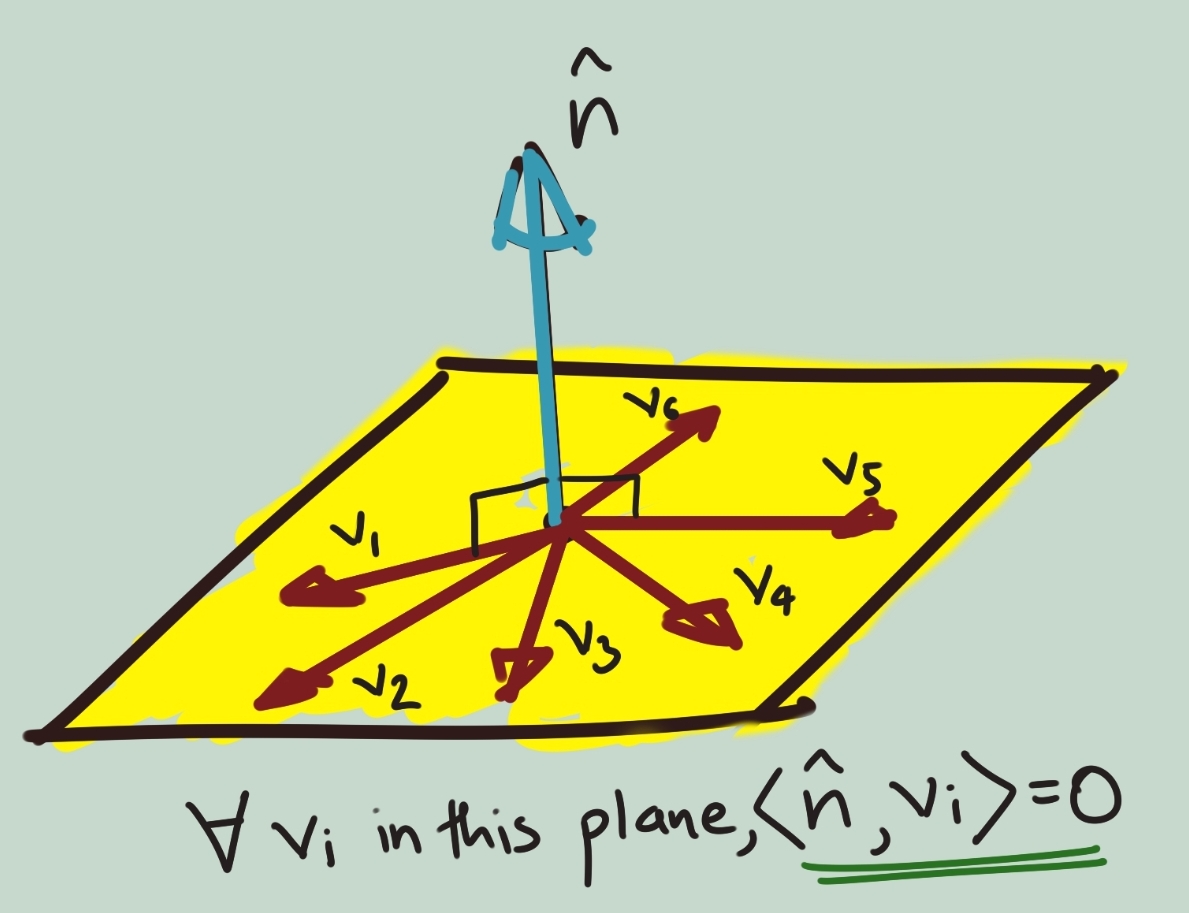 This guarantees a unique normal vector for that hyperplane, because by the Rank Nullity Theorem, the null space (where the normal vector resides) will have only one basis. As a counterexample, a 2D plane in \({\mathbb{R}}^4\) would have two linearly independent normal vectors, and thus does not qualify as a hyperplane in 4D space (but does qualify as one in 3D space).

What this implies is that any hyperplane defined as:

Incidentally, the above form is the most common form of expressing a hyperplane, i.e., by referencing its normal vector.

In addition to vectors (and by extension, matrices) being used to frame almost every Machine Learning/Statistics problem, these are some examples of how they are used: