Matrix multiplication (outer product) is a fundamental operation in almost any Machine Learning proof, statement, or computation. Much insight may be gleaned by looking at different ways of looking matrix multiplication. In this post, we will look at one (and possibly the most important) interpretation: namely, the linear combination of vectors.

In fact, the geometric interpretation of this operation allows us to infer many properties that might be obscured if we were treating matrix multiplication as simple sums of products of numbers.

Quick Aside: There are some other ways of viewing matrix multiplication, which we will address in one of the future articles (element-wise, columns-into-rows).

To begin with, I’ll state the one fact that holds true no matter how you performing matrix multiplication. Even if you forget everything you read in this article, remember this thing:

Matrix multiplication is a linear combination of a set of vectors.

This is nothing special, simply a scaling of the \(\begin{bmatrix}2 && 3\end{bmatrix}^T\) matrix.

In this approach, we are only correlating columns on both sides. Consider the following diagram to see how this combination works. 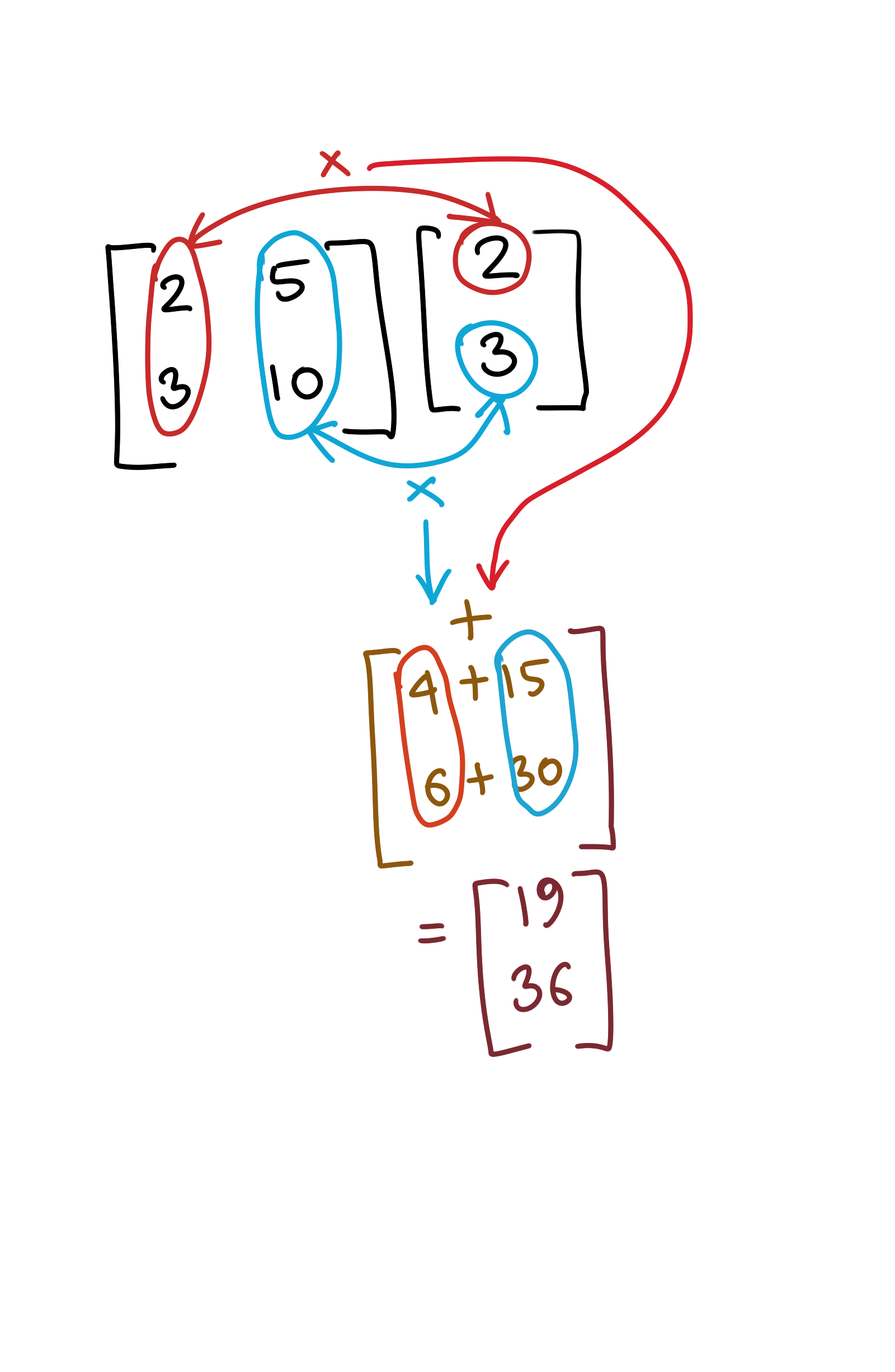 What you are really doing is this: you are considering the weighted sum of all the column vectors of \(A_2\) (Remember, in this picture, \(A_2\) is just a bunch of column vectors).

What are these weights? Each value in the column in \(v_2\) is a weight. Each weight scales a column vector, and these weighted vectors are added together to form a single column.

To put it more concretely in this example, your computation is as follows: 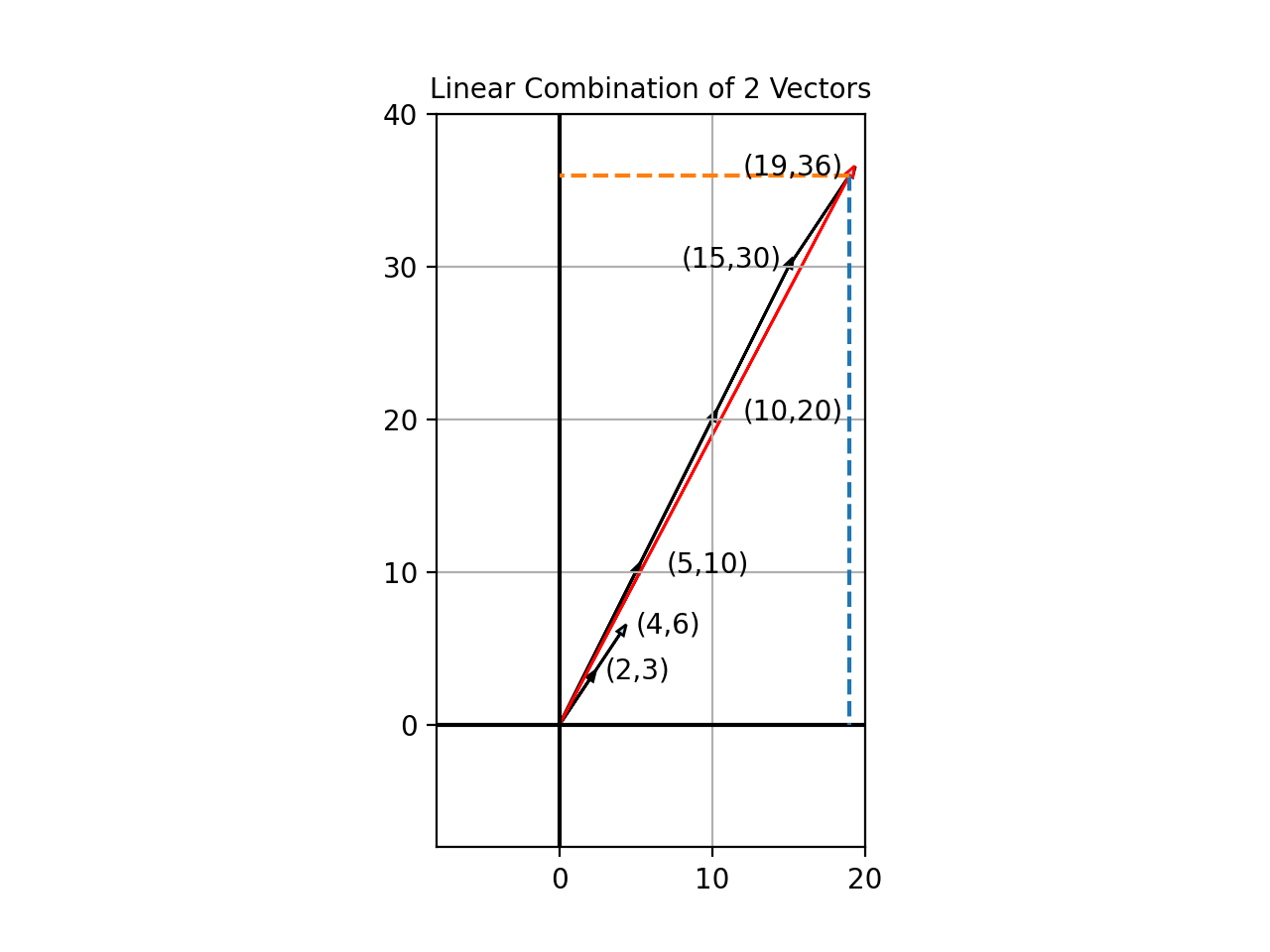 Let’s extend to the more general case, where we add another column to \(v_2\), so now that we have:

How do we extend what we already know to this new case? Very simple: each column in \(v_3\) results in a corresponding column in the final result, and each output column is computed exactly the same. You are still linearly combining all the column vectors in \(A_3\), but the set of weights you’re using depends upon which column of \(v_3\) you are using for computation. Thus, this new computation is as follows:

Quick Aside: The column vectors which are linearly combined, come from the left side of the expression. The weights come from the right side. This is important to know, since the row column interpretation (which we will study next) inverts the order.

The concept of linear combination of vectors works equally well, if you consider the rows of a matrix as vectors. The same concept applies: each row in the output is the sum of all the weighted row vectors.

The algorithmic picture for multiplication using the row vector approach looks like this: 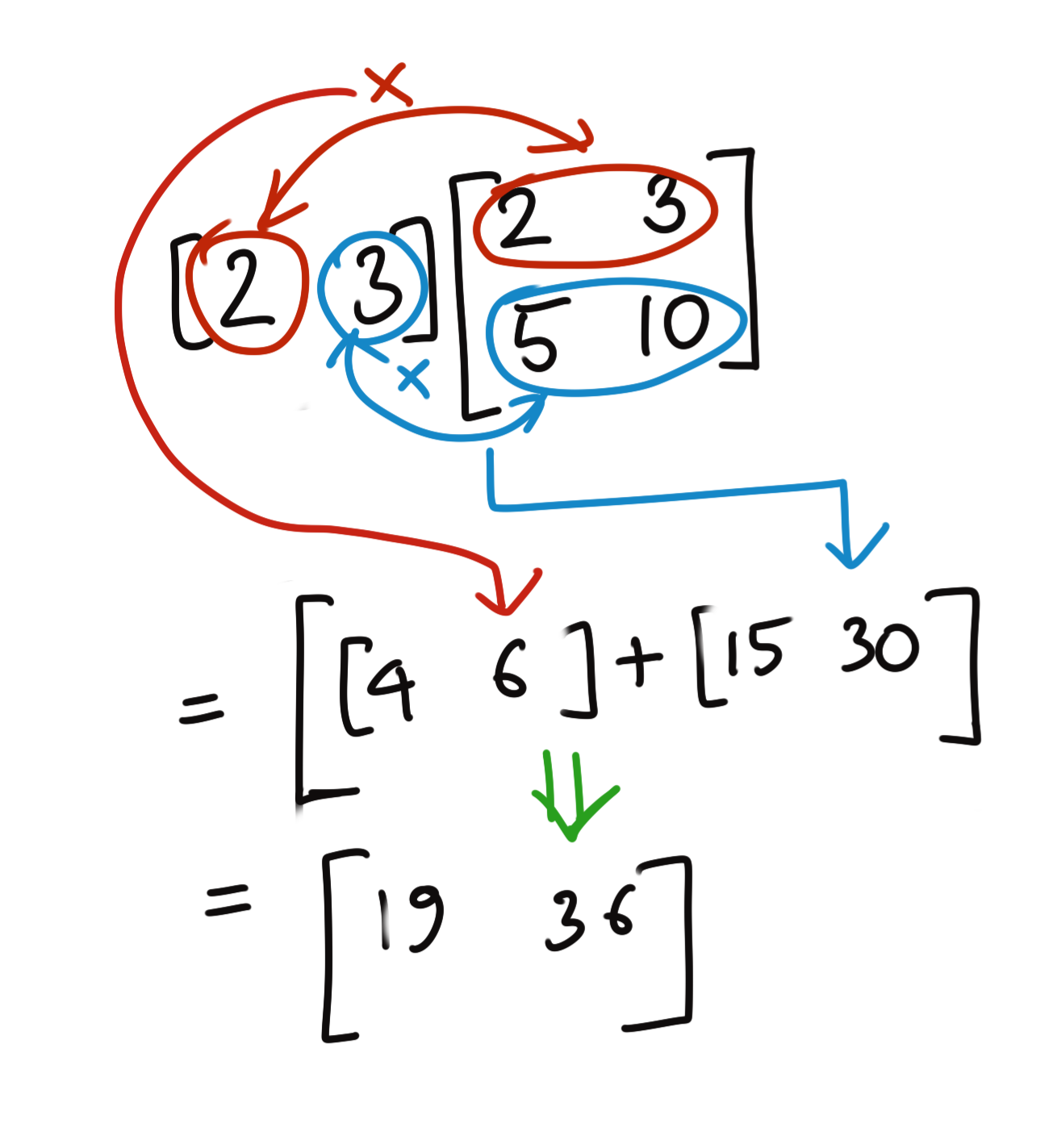 It is important to note that the central idea here (regardless of whether we are considering column vectors or row vectors) is that we are computing linear combinations of vectors. The geometric interpretation for this example stays the same. You should also convince yourself by doing this calculation by hand.

It is worth computing the original \(Av\) computation using the row vector approach, just to consider how different the rows are, and what the weights are. You should still get the same answer, however.

3. The Transponse of Matrix Multiplication

One thing you will have noticed is the way I set up the column vector and row vector examples.

Obviously, \(Y_1^T=Y_2\). Substituting the original expressions in the above, we get:

This is just an example, but it is part of a more general rule about transposes, which is that:

We will also see a similar rule for inverses when discussing inverse matrices.