This article lays the groundwork for an important construction called Reproducing Kernel Hilbert Spaces, which allows a certain class of functions (called Kernel Functions) to be a valid representation of an inner product in (potentially) higher-dimensional space. This construction will allow us to perform the necessary higher-dimensional computations, without projecting every point in our data set into higher dimensions, explicitly, in the case of Non-Linear Support Vector Machines, which will be discussed in the upcoming article.

This construction, it is to be noted, is not unique to Support Vector Machines, and applies to the general class of techniques in Machine Learning, called Kernel Methods. An important part of the construction relies on defining the inner product of functions, as well as notions of Positive Semi-Definiteness: these are the concepts we will discuss in this article.

A lot of this material stems from Functional Analysis, and we will attempt to introduce the relevant material here as painlessly as possible for the engineer.

Most of the ideas here can be intuitively related to familiar notions of \(\mathbb{R}^n\) spaces, and we’ll use motivating examples to connect the mathematical machinery to the engineer’s intuition.

We begin with the motivation for introducing this material. Consider a set of ten data points, all one-dimensional. We write them as:

Furthermore, let us assume that some of them belong to the class Green, and the rest to the class Red. Let us assign values and classes to them, to be more concrete:

We represent them on the number line, like so

In this case, we would like to find a single point that creates a Red and a Green partition.

You can quickly see that there is no way you can choose a single point that can do this. This is obviously because the Green data set is “surrounded” by the Red data set on either side.

There is a way out of this quandary: we can lift our original data set into a higher dimension. As an illustration, let us pick the function \(f(x)=x^2\) to lift our data set into \(\mathbb{R}^2\).

Now, can we separate the resulting two-dimensional points using a linear function? Yes, we can. I’ve picked a random straight line \(x-2y+12=0\) to illustrate this separation, but there is an infinite number of straight lines that will do the work. This situation is shown below: 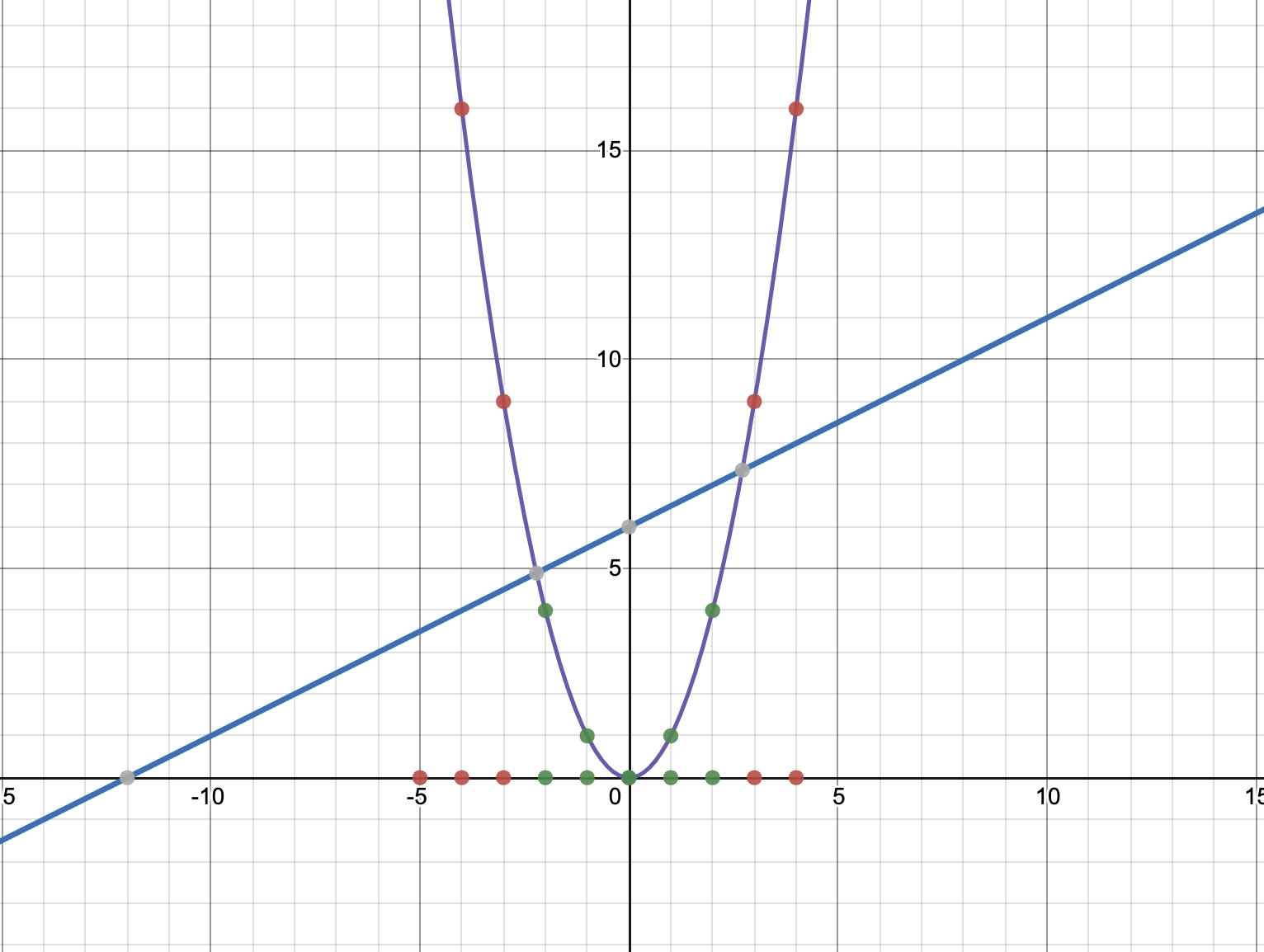 The same concept applies to higher dimensional data sets. A linearly non-separable data set in \(\mathbb{R}^2\) can be made linearly separable (using a plane) if it is lifted to \(\mathbb{R}^3\).

This is a common technique used in Machine Learning algorithms as a way to make classification problems easier. Generally speaking, a linearly non-separable data set can be made linearly separable by projecting it onto a higher dimension. This projection into higher dimensions is not an ML algorithm by itself, but can be an important step as part of data preparation. 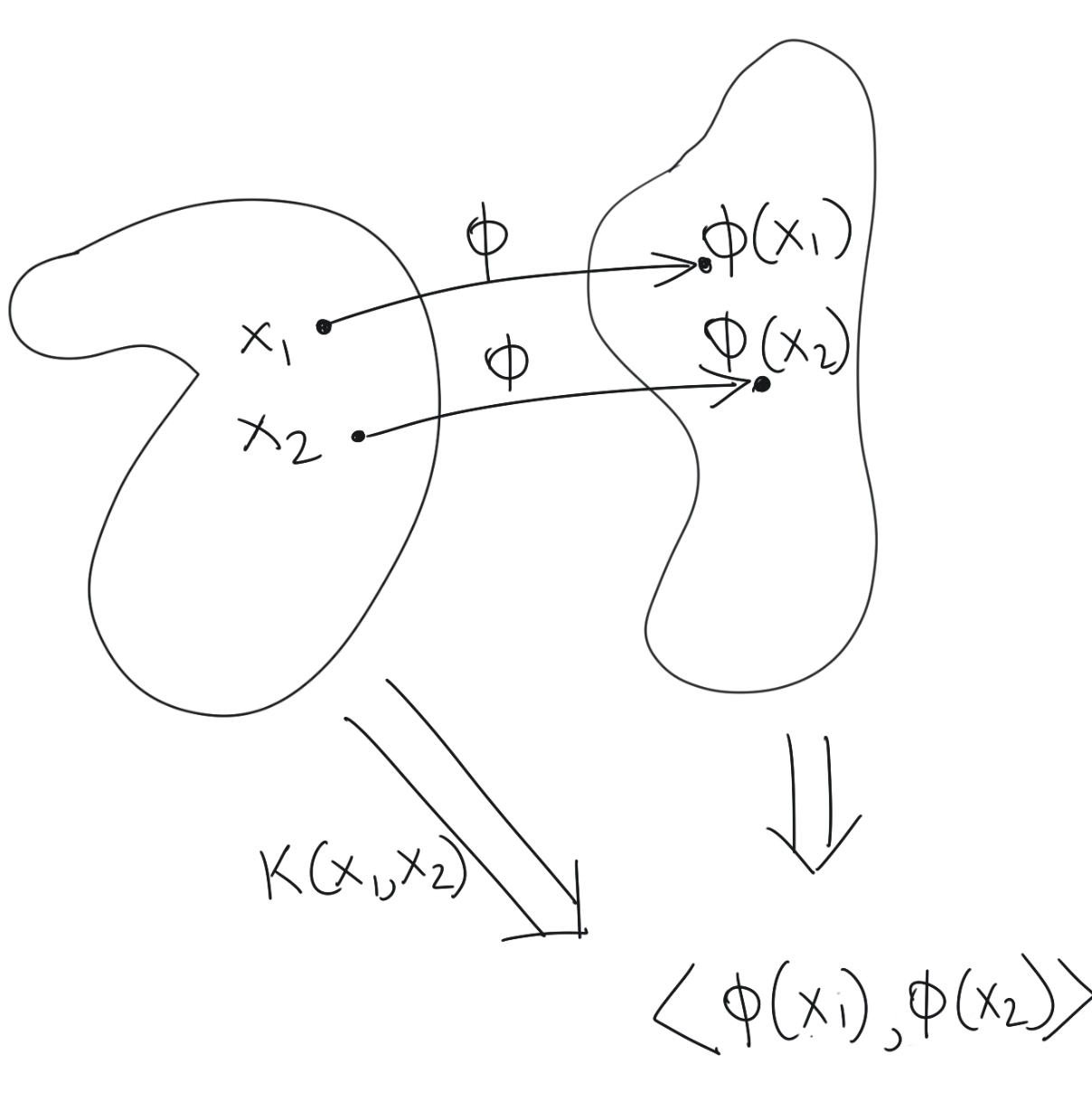 Such a function which satisfies our requirements is called a Kernel Function, and is the main motivation for developing the mathematical preliminaries in this article.

We are used to dealing with finite dimensional vectors, mostly in \(\mathbb{R}^n\). A function \(f:\mathbb{R}^n\rightarrow \mathbb{R}\) in the most general sense, can be treated as a sequence of vectors. However, even if we restrict the domain of a function, there is always an infinite number of values that the function \(f\) will take within even this restricted domain, since there are always going to be an infinite number of real numbers in the chosen interval.

We can proceed to build our intuition by looking at the following arbitrary function. For convenience of discussion, we restrict the discussion to the range \(x\in[a,b]\). 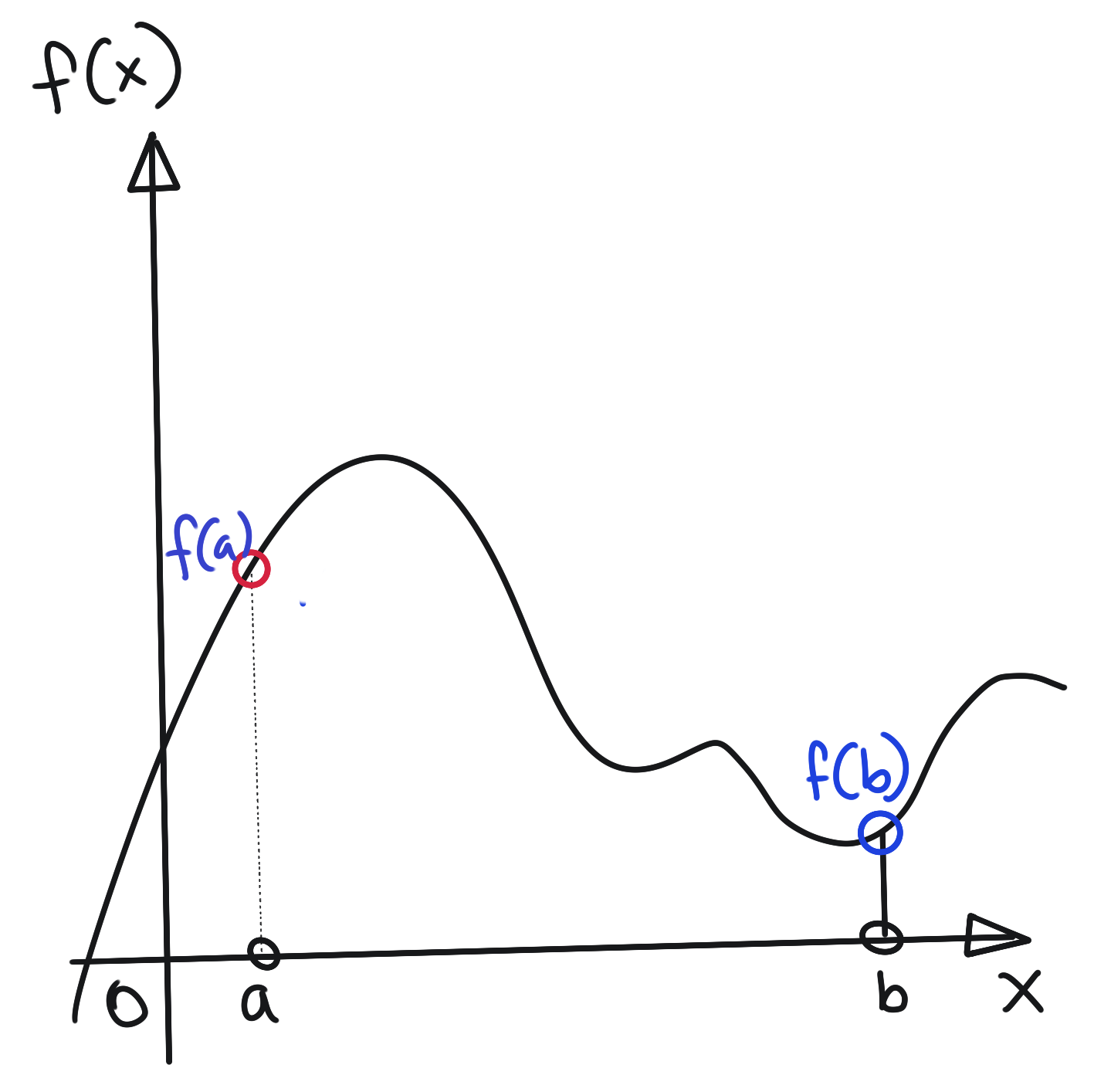 Let us decide to approximate this function \(f(x)\) by taking five samples at equal intervals \(\Delta x\), as below: 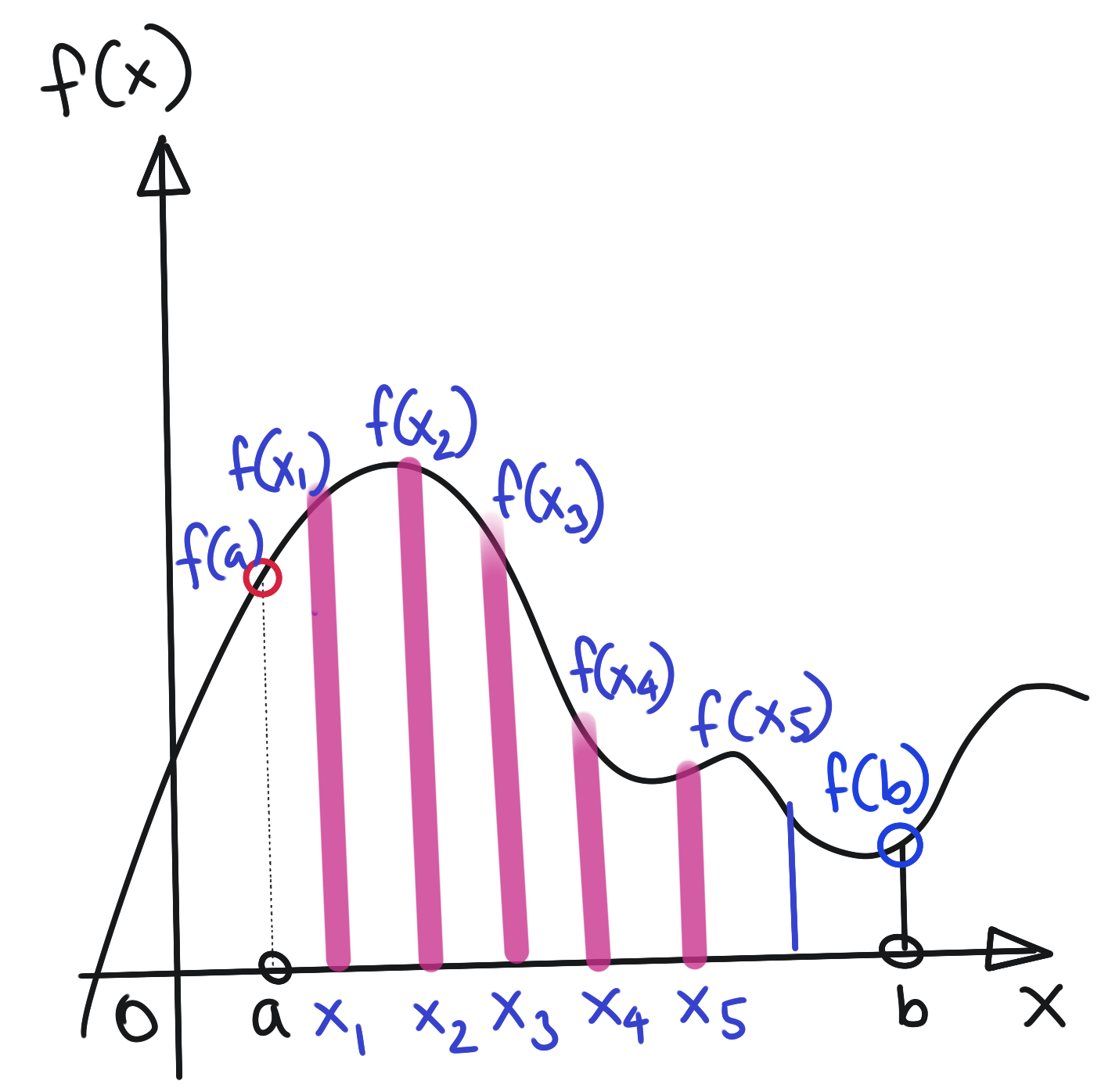 We may represent this approximation of \(f(x)\) by a vector of these five samples, i.e.,

The above is a vector in \(\mathbb{R}^5\). Increasing the number of samples (which in turn decreases \(\Delta x\)), results in a higher dimensional vector, as shown below: 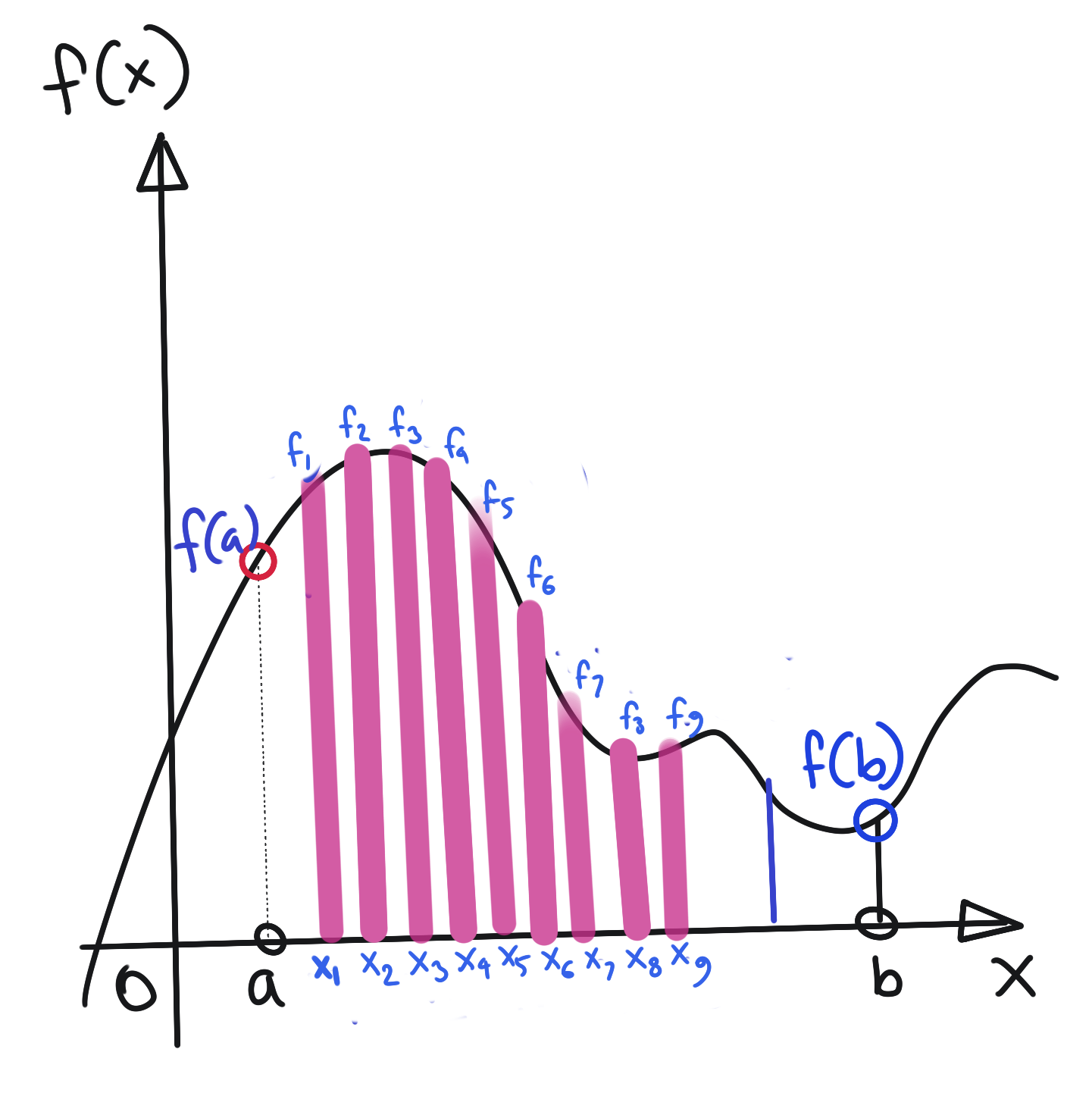 Now, we can approximate \(f(x)\) with a 9-dimensional vector, like so:

Indeed, we can show that functions respect all the axioms of a vector space, that is:

There is one important property of vector spaces that we’ve taken for granted in our discussions on Linear Algebra so far: the fact that the inner product is a defined operation in our \(\mathbb{R}^n\) Euclidean space.

The Dot Product that I’ve covered in previous posts with reference to Linear Algebra is essentially a specialisation of the general concept of the Inner Product applied to finite-dimensional Euclidean spaces. We will begin using the more general term Inner Product in further discussions.

Another important point to note: we will be switching up notation. Inner products will henceforth be designated as \(\langle\bullet,\bullet\rangle\). Thus, the inner product of two vectors \(x\) and \(y\) will be written as \(\langle x,y\rangle\).

There are a few important properties any candidate for an inner product must satisfy. All these properties intuitively make sense since we’ve been using them without stating them implicitly while doing Matrix Algebra.

Another interesting property we have taken for granted is the existence of the norm of a vector \(\|\bullet\|\). In plain Linear Algebra, the norm is essentially the magnitude of a vector. What is interesting is that the norm need not be separately specified as a property of vector space; it comes into existence automatically if an inner product is defined on a vector space. To see why this is the case, note that:

As usual, we have restricted the domain of discussion to be \([a,b]\). Also note that 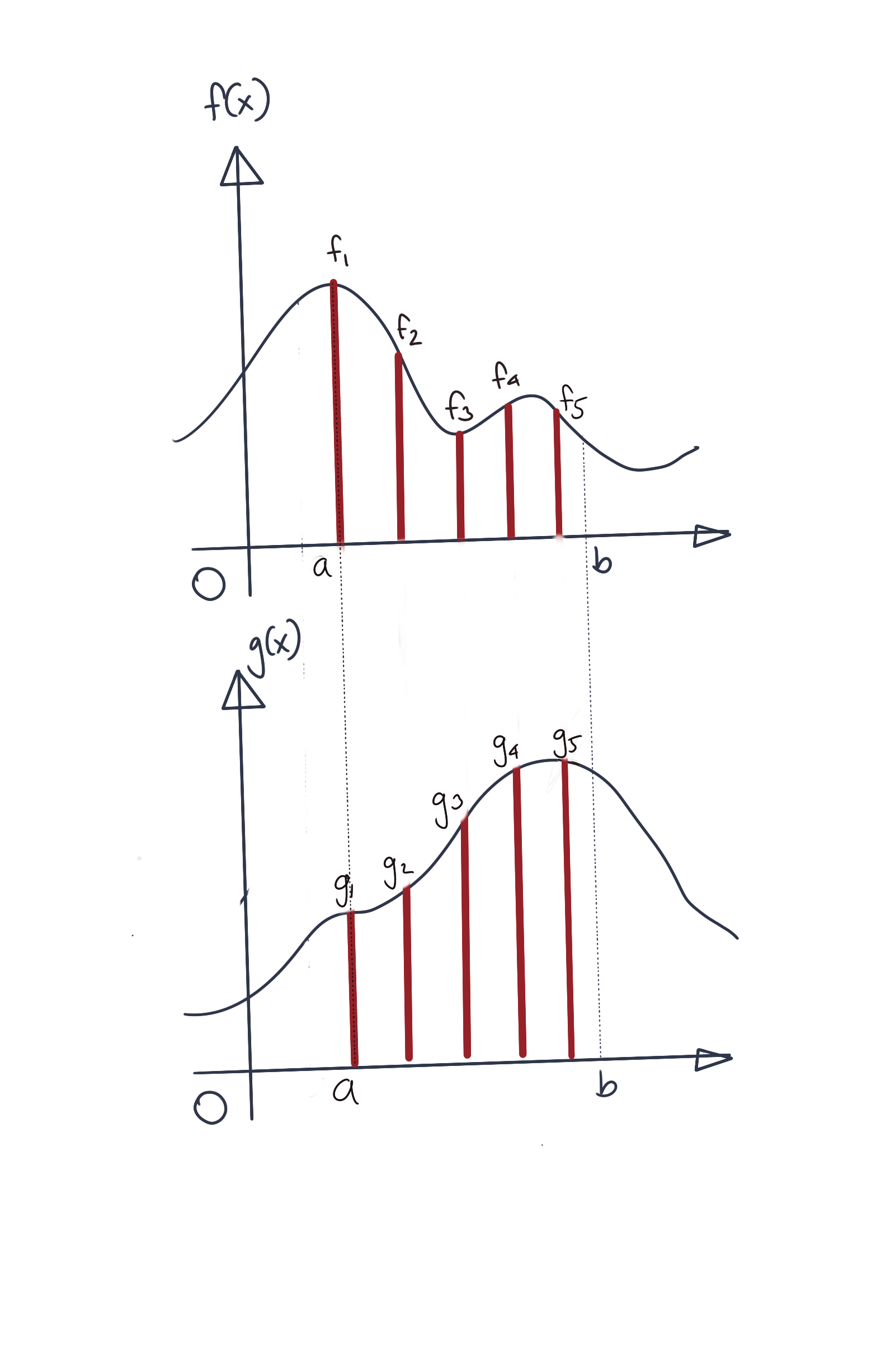 The approximate vector after multiplying the coefficients in the corresponding dimensions would then be:

Note that the above vector is not the actual inner product, for that we will still need to sum up the samples as we describe next. Let us assume that if the inner product \(\langle f,g\rangle\) was computed perfectly, it would have the graph as below. Here the true inner product is shown along with the vector \(\tilde{f(x)}\tilde{g(x)}\) overlaid onto it.

Now let us consider how you’d want to calculate the inner product. Naively, we can simply sum up the values of \(\tilde{f(x)}\tilde{g(x)}\). However, this would not necessarily be a good approximation, since we are leaving out parts of the function that we are not sampling. All the parts of the function between any consecutive pair of samples are not accounted for at all. How are we then to approximate these missing values. 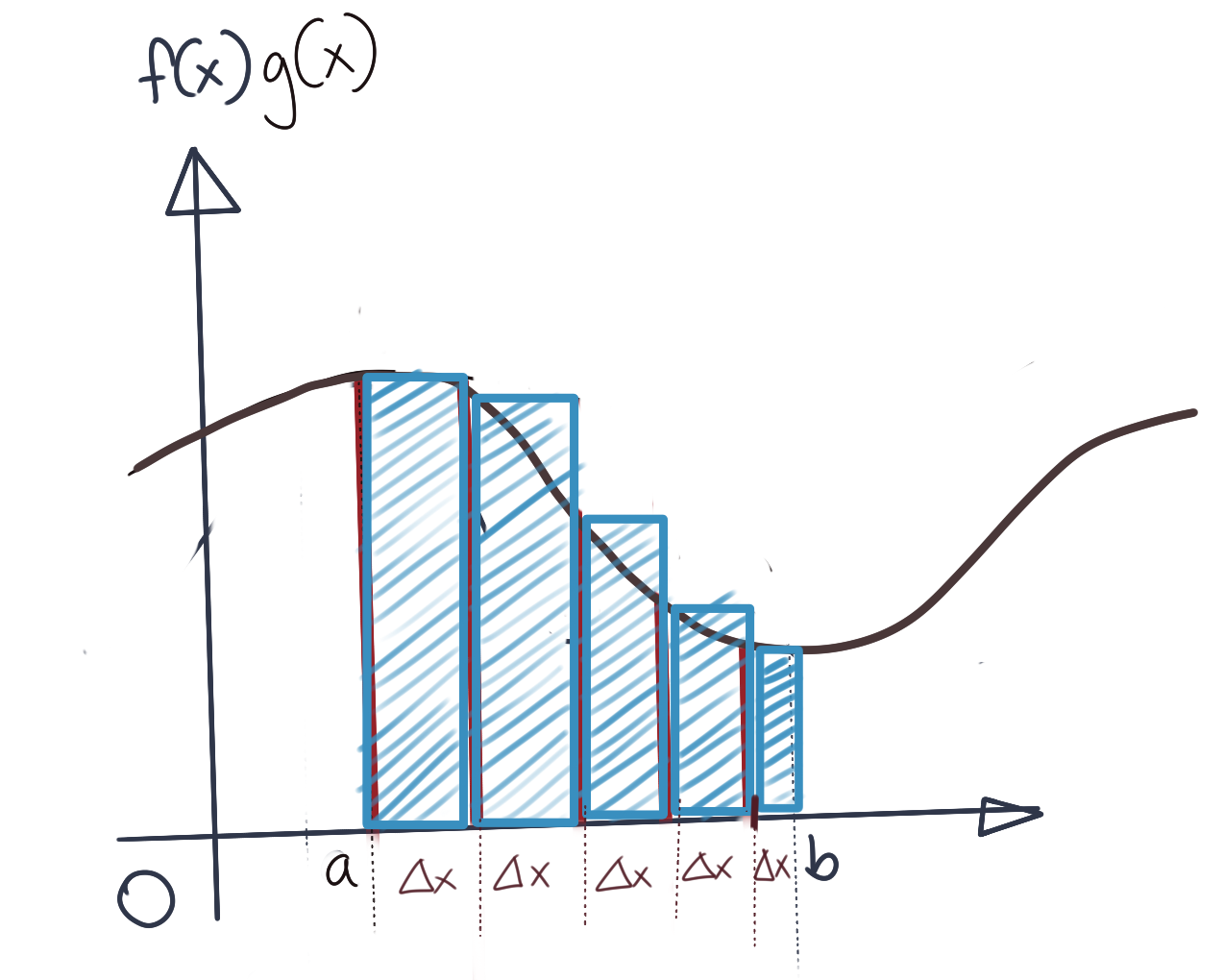 Of course, this is only an approximation, and the more samples we take, the better our approximation will be. In the limit where \(\Delta x\rightarrow 0\), and \(i\rightarrow\infty\), this changes into an integral with limits \(a\) and \(b\), as below:

If functions can be treated as vectors, we should be able to express - and create - functions as linear combinations of other functions. The implication then is also that functions can also serve as basis vectors. We can essentially bring to bear all the machinery of Linear Algebra, since its results apply to all sorts of vectors. Things like orthogonality, projections, etc. also apply to functions now. The unifying idea is that vectors can be matrices, or functions, or other things.

Thus, a set of functions can span a vector space of functions. This idea will be an important part in the construction of RKHS’s.

Positive semi-definite matrices are square symmetric matrices which have the following property:

Positive semi-definite matrices can always be expressed as the product of a matrix and its transpose.

See Cholesky and \(LDL^T\) Factorisations for further details on how this decomposition works. To see why a Cholesky-decomposable matrix satisfies the positive semi-definiteness property, rewrite \(v^TSv\) so that:

The important result to know is that all positive semi-definite matrices have a Cholesky Factorisation. We will explore the proof in a future post.

Inner Product and the Gram Matrix

With this intuition, we turn to a common operation in many Machine Learning algorithms: the Inner Product. The inner product is a very common operation. As we discussed in the first section of this article, inner product calculations usually need to be combined with projecting the original input vectors to a higher dimensional space first. We will revisit the SVM equations in an upcoming post to see the use of the Gram Matrix, which in the context of kernel functions is simply the matrix of all possible inner products of all data points.

where \(v\) is any \(n\times 1\) vector. Let’s expand out the final result because that is a form we will see in both the construction of the Reproducing Kernel Hilbert Spaces, as well as the solutions for Support Vector Machines.

Then, expanding everything out, we got:

Note that the first factor in a couple of lines, is written in transpose form to make it more readable. Thus, from the above expansion, we get:

For a positive semi-definite kernel \(K\), we must have this expression non-negative, that is: