Statistics from Geometry and Linear Algebra

This article covers some common statistical quantities/metrics which can be derived from Linear Algebra and corresponding intuitions from Geometry, without recourse to Probability or Calculus. Of course, those subjects add more rigour and insight into these concepts, but our aim is to provide a form of intuitive shorthand for the reader.

Much of this stems from me attempting to understand links between statistical concepts and Linear Algebra. This post is a work in progress and will receive new additions over time.

We will discuss the following relations:

For data sets, we use the convention of observations-by-features. Each row in a matrix is a single point in the data set, i.e., an observation. A single column represents the sequence of recordings of a single feature (dimension) across all the points in our data set.

Mean, covariance, etc. are always computed for a given dimension (feature), not across dimensions, which would make no sense, since each dimension represents a separate domain variable. In terms of probability, each feature is a Random Variable.

Mean as the Projection Coefficient onto the Model Vector

Recall that the projection coefficient of a vector \(b\) onto a vector \(a\) is given by:

The situation is as below.

which is the formula for the mean.

A similar relation holds for the variance of a data set. For the mean, we have already calculated the projection of the data set vector onto the Model Vector. The vector \(X-\nu_1t\) is, by definition, always perpendicular to the Model Vector \(\nu_1\), and thus lies in its null space.

In \(\mathbb{R}^n\) (for \(n\) entries in the data set), the nullspace of the Model Vector is the plane perpendicular to it and passing through the origin, as shown in the image below. Obviously, \(X-\nu_1t\) lies on this plane. This plane is referred to as the Error Space. Thus, stated another way,\(X-\nu_1t\) is the projection of the data vector \(X\) onto the nullspace of the Model Vector.

Of particular note is the fact that the Error Space is an \((n-1)\)-dimensional hyperplane in \(\mathbb{R}^n\). The variance is defined as the norm squared of the projection of the dataset vector \(X\) into the Error Space, averaged across a set of orthonormal basis vectors in the Error Space.

For an \((n-1)\)-dimensional hyperplane, the number of orthonormal basis vectors is \(n-1\). See the picture below for clarification. 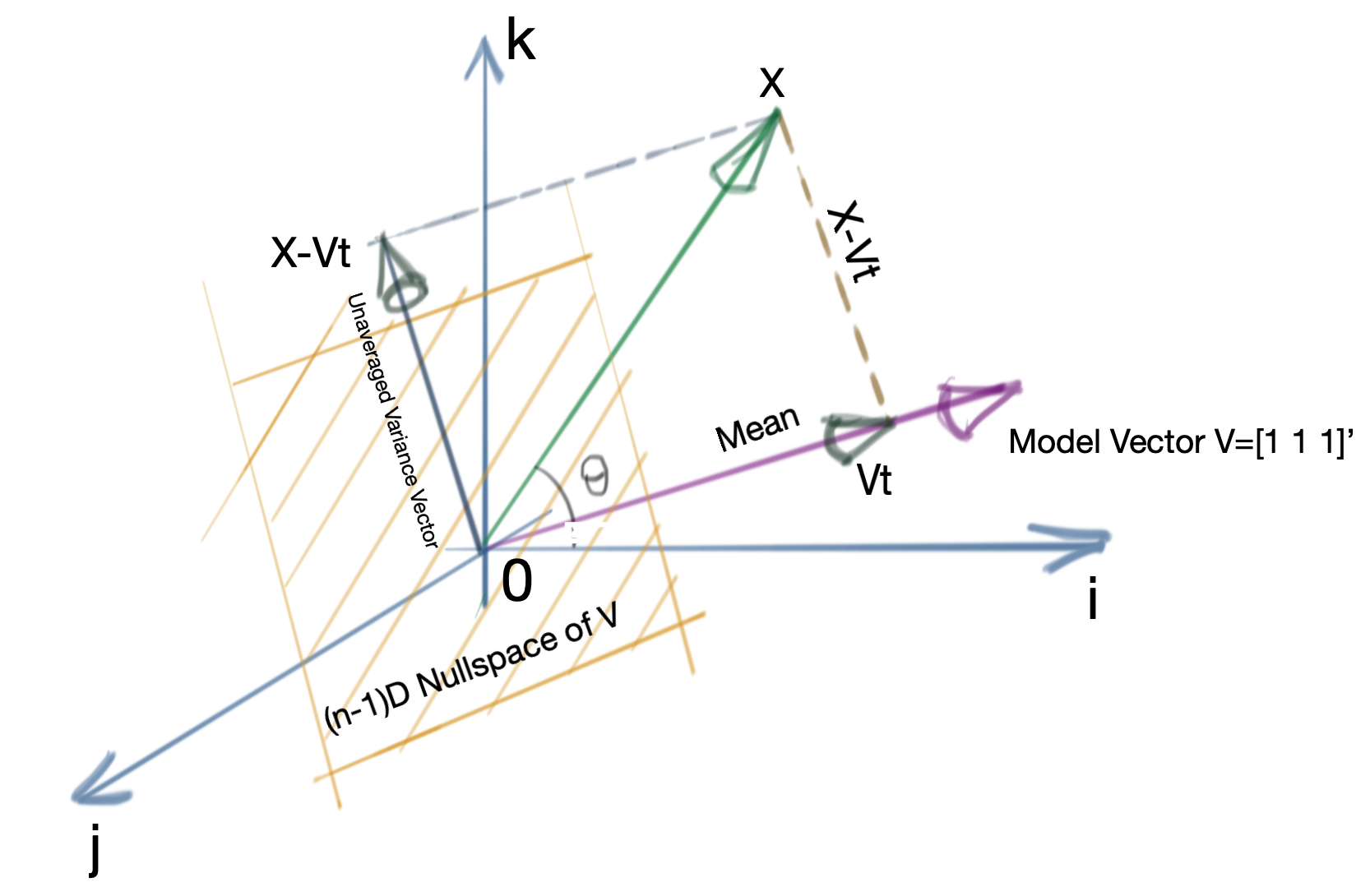 The variance then comes out as:

This provides an intuitive explanation of why the sample variance (and consequently standard deviation) has an \(n-1\) in its denominator instead of \(n\).

In multi-dimensional space, where there are \(n\) observations and \(f\) features, \(X\) is an \(n\times f\) matrix, and the above expression becomes the Covariance Matrix, denoted by \(\sigma\), which is an \(f\times f\) matrix.

The Pearson’s Correlation Coefficient for two data sets \(X\) and \(Y\) is usually defined as:

then the numerator reduces to \({X_c}^TY_c\) which is essentially the Euclidean inner product \(\langle X_c,Y_c\rangle\) of the two datasets.

Recall that the Inner Product of two vectors (where \(\theta\) is the angle between them) in Euclidean space is defined as:

That is, the Pearson’s Correlation Coefficient is simply the cosine of the angle between the two dataset vectors \(X_c\) and \(Y_c\).

Using the same identities we saw while discussing Pearson’s Correlation Coefficient, we can rewrite this as:

However, note that the above expression is of the same form as that of the projection coefficient in \(\eqref{eq:projection-coefficient}\)

Note that in the general case of \(\mathbb{R}^n\), you get the regression coefficient with a similar form, namely, as a result of the solution of a set of linear equations. We discuss this next.

There are several perspectives we can use when discussing Linear Regression in \(\mathbb{R}^n\). We discuss two views of this in the following sections.

1. Linear Regression as Solution of a Set of Linear Equations

Assume a set of observations that we wish to represent using a linear model like so:

Obviously, this ends up in matrix form as below:

We need to solve for \(\beta\). \(X\) is not, in general, a square matrix (it would be extremely unlikely for the number of observations to exactly match the number of features of the dataset). Thus, we cannot take the inverse of \(X\) directly. However, we can take the inverse of \(X^TX\) since the product of a matrix and its transpose is symmetric (also positive semi-definite, incidentally).

Intuitively, the smallest error is the vertical projection of \(Y\) onto \(C(X\beta)\). The diagram below shows the situation. 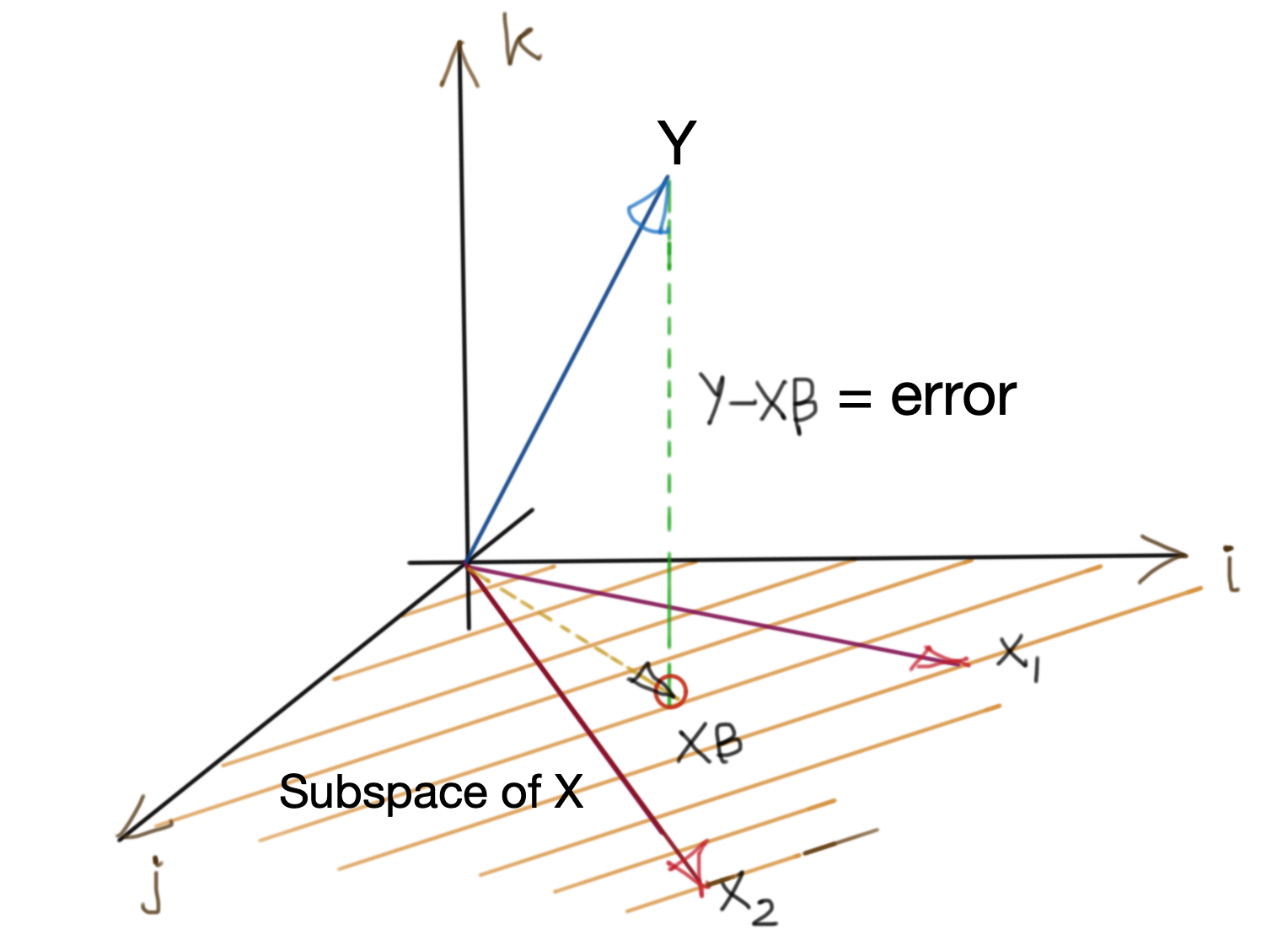 This implies that that the error vector \(Y-X\beta\) should be orthogonal to any vector in \(C(X\beta)\).

which is the same result that we got in the previous section.