In this article, we take a detour to understand the mathematical intuition behind Constrained Optimisation, and more specifically the method of Lagrangian multipliers. We have been discussing Linear Algebra, specifically matrices, for quite a bit now. Optimisation theory, and Quadratic Optimisation as well, relies heavily on Vector Calculus for many of its results and proofs.

Most of the rules for single variable calculus translate over to vectors calculus, but now we are dealing with vector-valued functions and partial differentials.

This article will introduce the building blocks that we will need to reach our destination of understanding Lagrangians, with slightly more rigour than a couple of contour plots. Please note that this is in no way an exhaustive introduction to Vector Calculus, only the concepts necessary to progress towards the stated goal are introduced. If you’re interested in studying the topic further, there is a wealth of material to be found.

We will motivate most of the theory by illustrating the two-dimensional case in pictures, but understand that in actuality, we will often deal with higher-dimensional vector spaces.

Before we delve into the material proper, let’s look at the big picture approach that you will go through as part of this.

The reason we revisit this topic is because I want to introduce some new notation notation, and talk about a couple of properties you may or may not be aware of.

We will make more precise statements about these relationships in the next section on Rank-Nullity Theorem.

where \(V\) is the embedding space. This always ends up as the number of basis vectors required to uniquely identify a vector in \(V\). To take a motivating example:

This rule is pretty simple, it states the following: 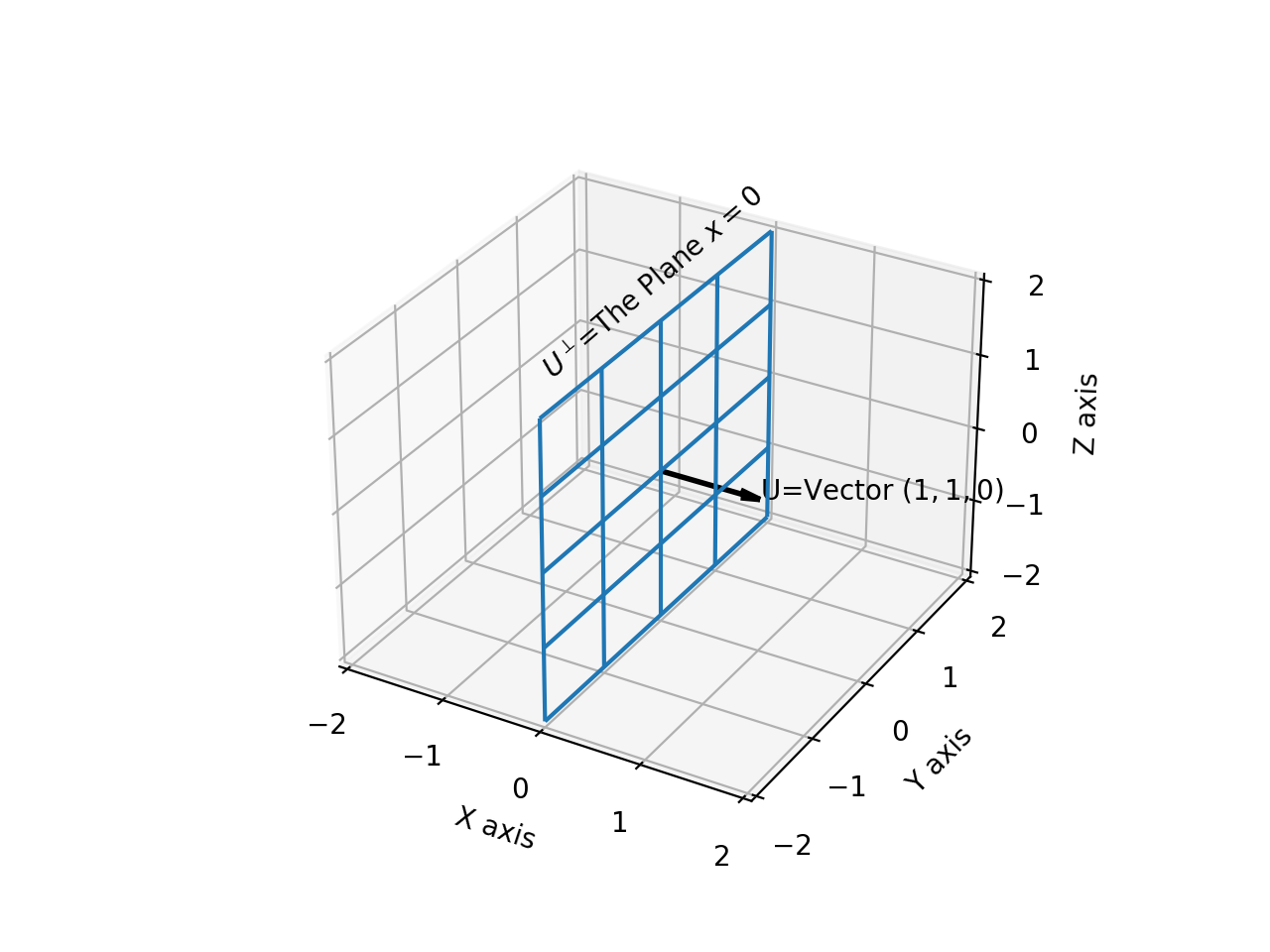 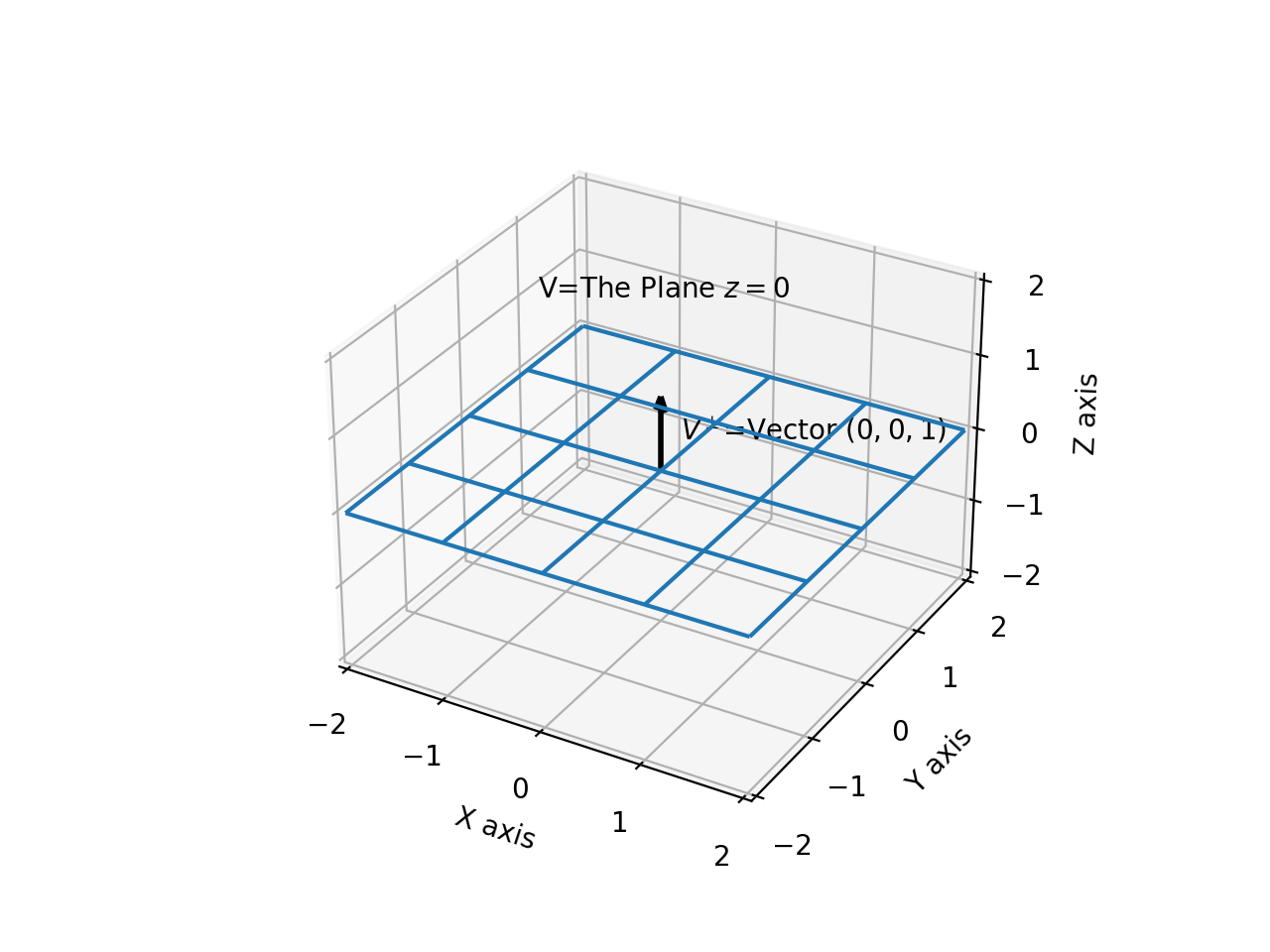 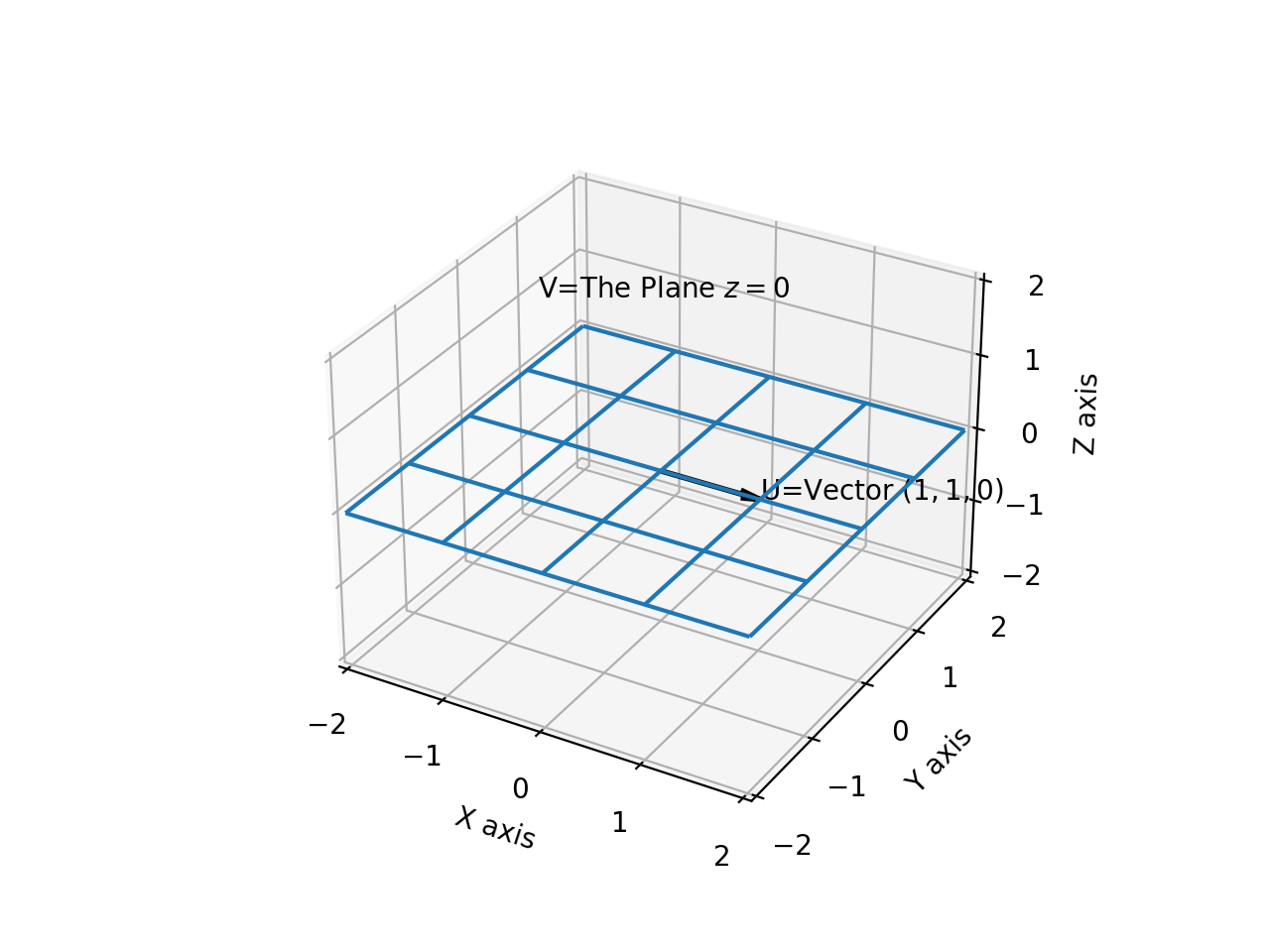 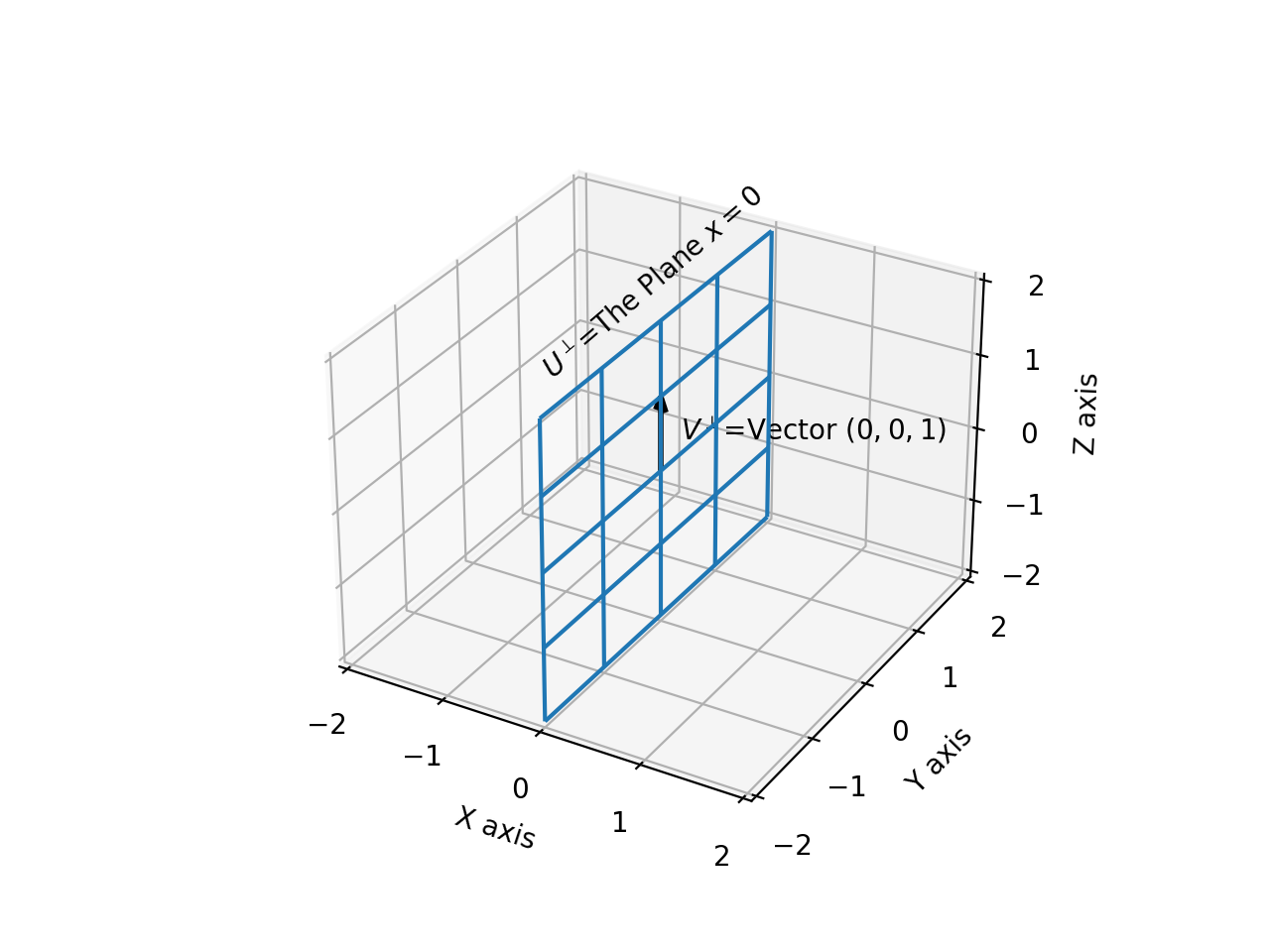 This validates the Subset Rule.

Optimisation problems boil down to maximising (or minimising) a function of (usually) multiple variables. The form of the function has a bearing on how easy or hard the solution might be. This section introduces some terminology that further discussion will refer to, and it is best to not admit any ambiguity in some of these terms.

Graph of a Function

Consider the function \(f(x)=x^2\). By itself, it represents a single curve. This is a function of variable. This is the picture of what it looks like: 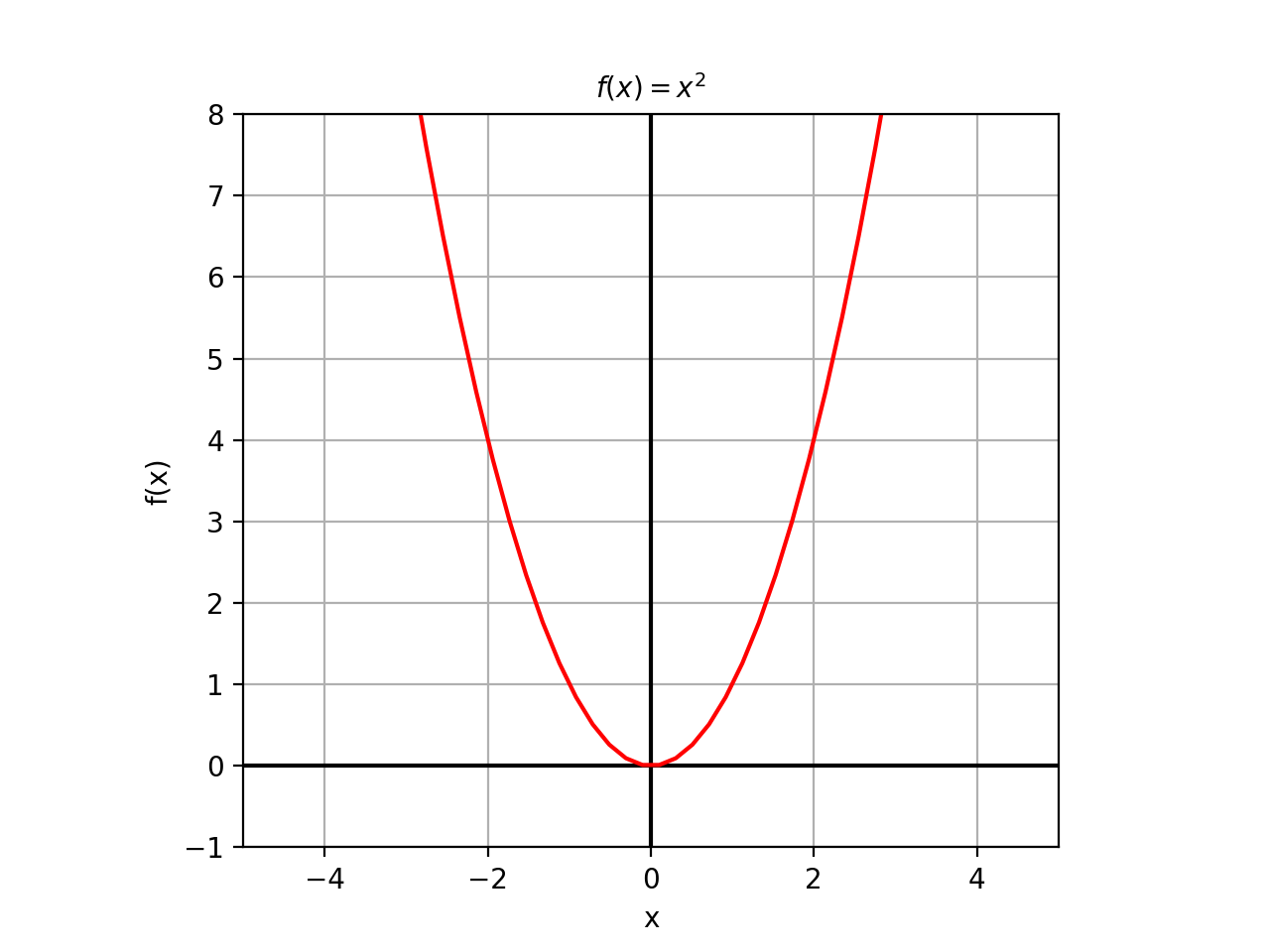 However, consider what the function \(g(x)=(x,f(x))\) looks like. This notation might seem unfamiliar – after all, isn’t a function supposed to output a single value? – but we have already dealt with functions that return multiple values; we just bundled them up in matrices. So it is the case in this scenario: \(g(x)\) takes in a value in \(\mathbb{R}\) and returns a matrix (usually a column vector, for the sake of consistency) of the form:

Level Set of a Function

Together, this will form a two dimensional surface in 3D space; the picture below shows what this surface would look like. 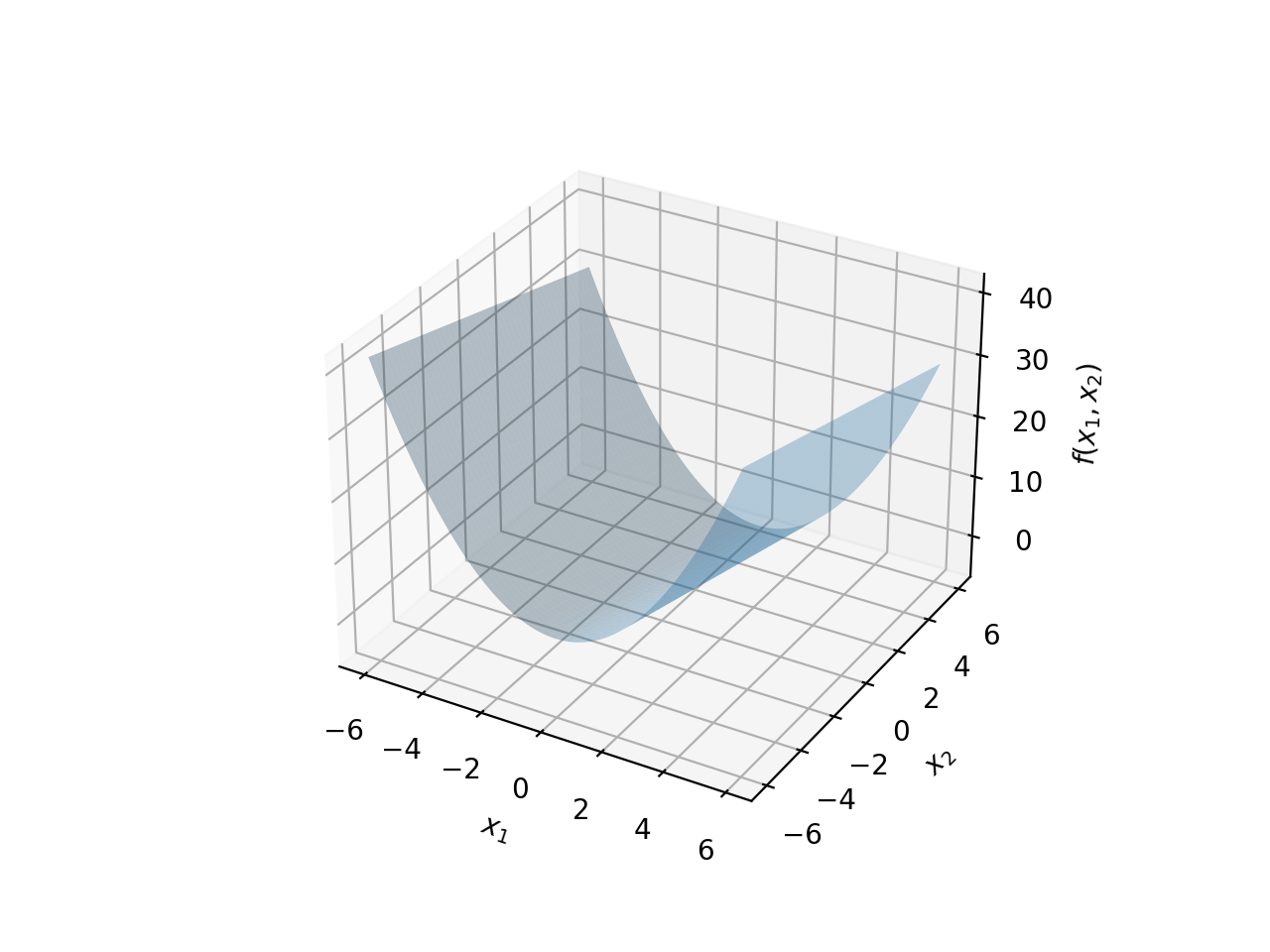 The surface above is a surface because there is no constraint. However, you can think of this surface as the family of all possible parabolas of the form \(x^2-y=C\), where we have let \(C\) unspecified. Each value of \(C\) gives us one parabola in this family. Let’s look at this in 2D first in the image below. 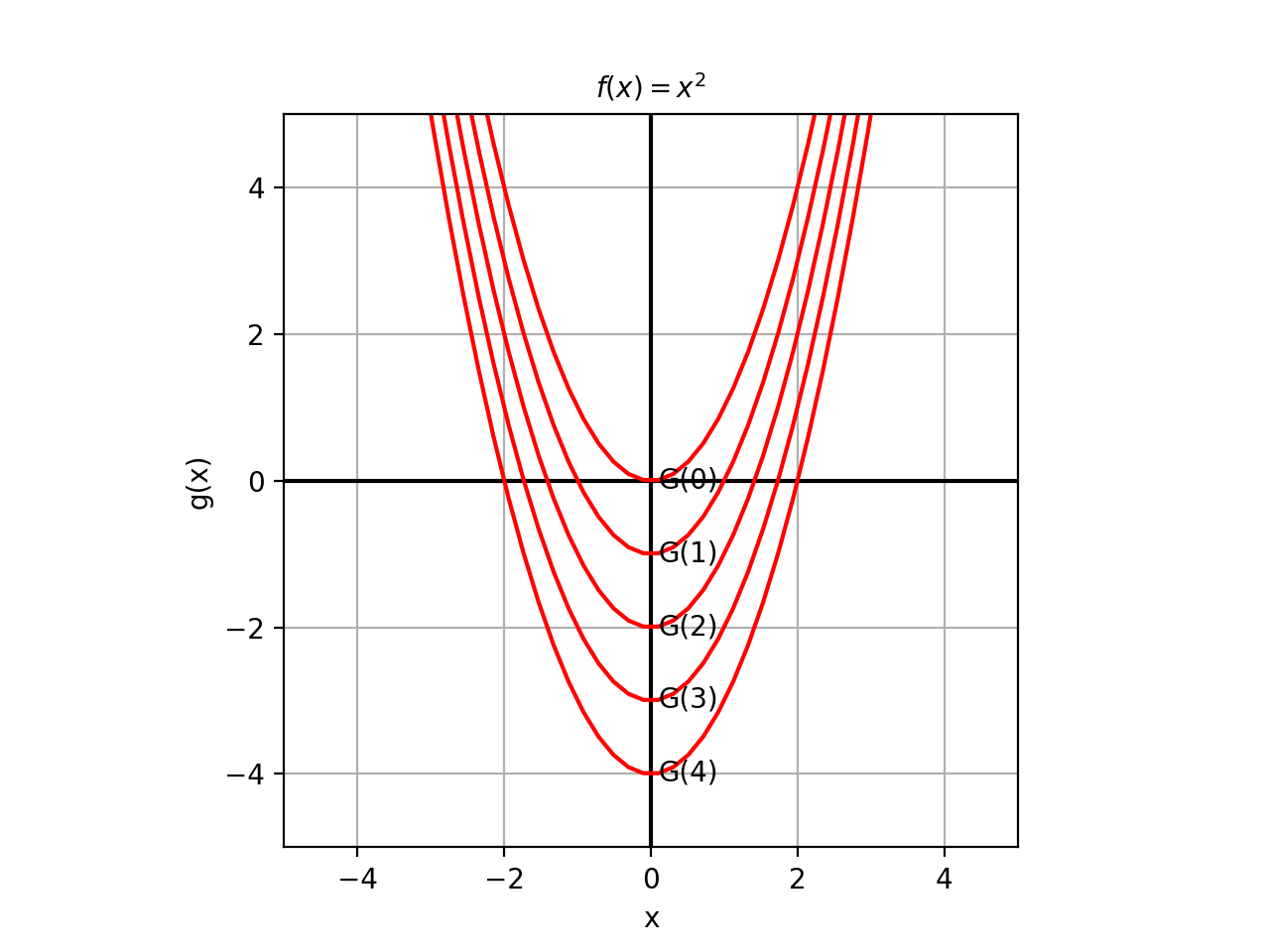 The above diagram does not give us the full picture. Remember, the actual value of \(C\) is not pictured here, because it exists in the third dimension. We need to go back to our parabola surface we pictured earlier. We will do the same thing, plot some sample members of this family, but this time we will also position them along the Z-axis based on what value \(f(x)\) assumes (which is of course \(C\), since we are explicitly fixing for each level set/parabola). 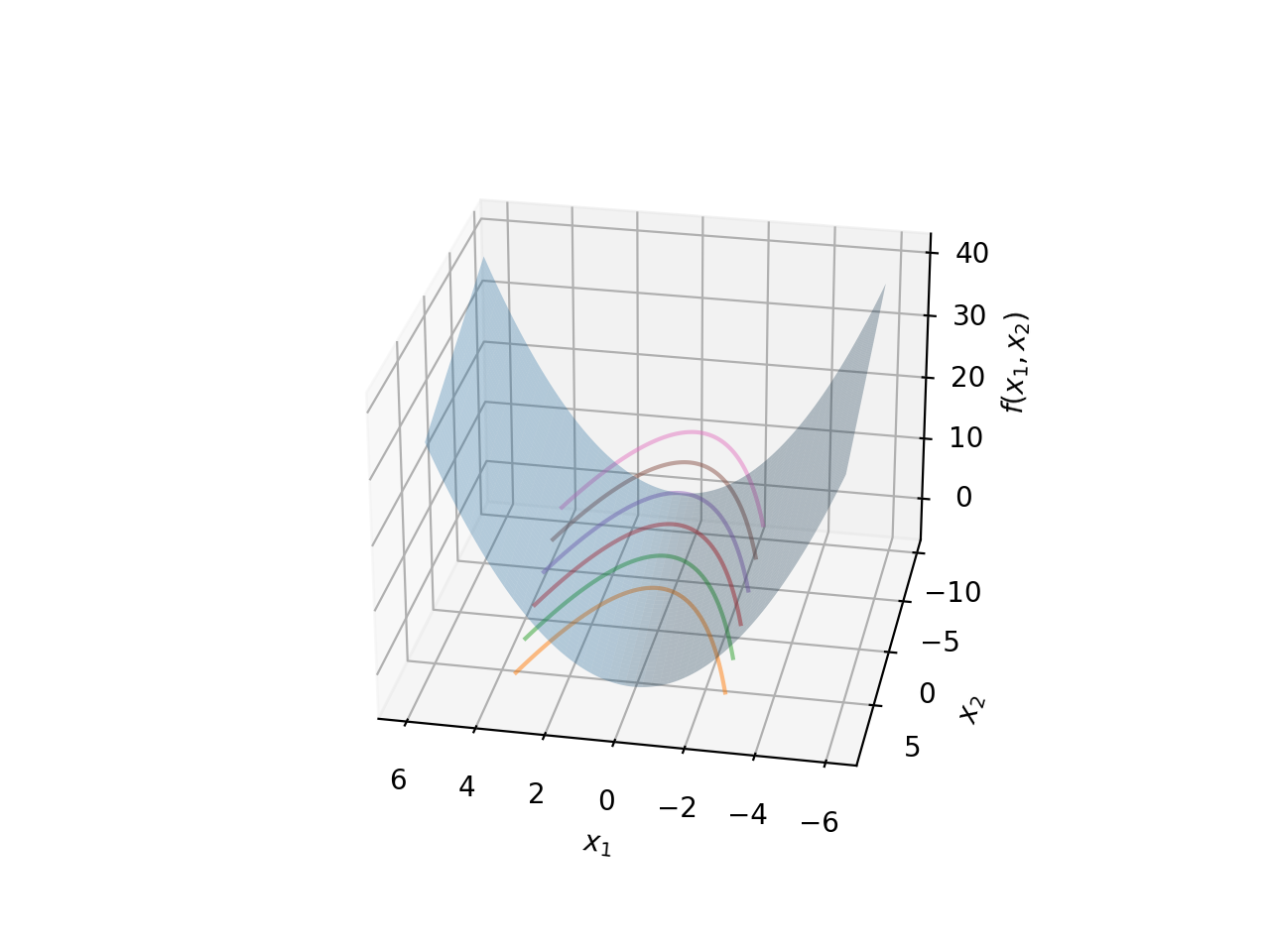 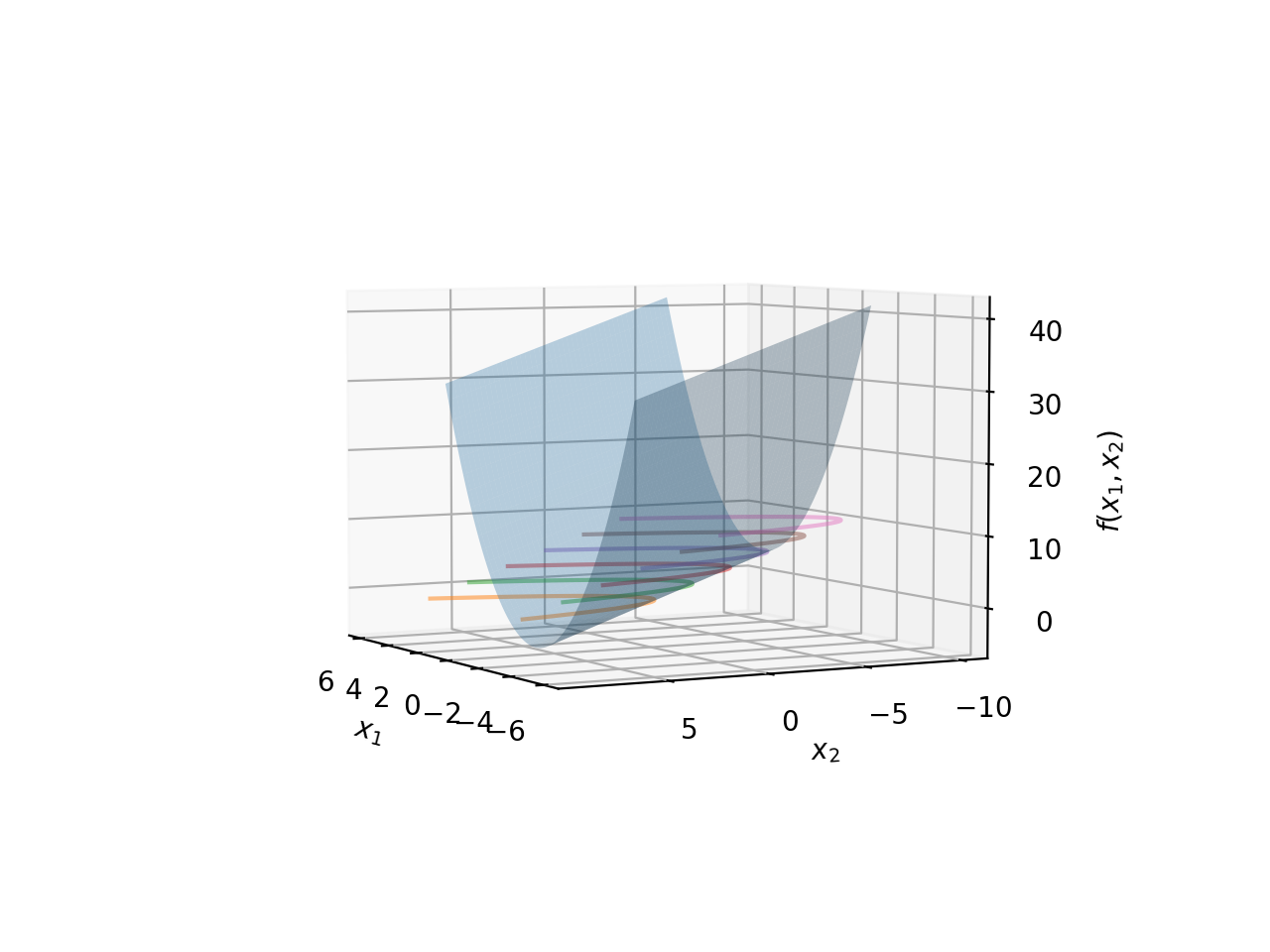 A circle is usually a better candidate for demonstrating this visually, thus we will repeat the same illustration with the function \(f(x)=x^2+y^2\). This defines the family of circles centered at \((0,0)\) with all possible radii \(C\in\mathbb{R}\).

As usual, picking a particular radius fixes a level set on the surface of this family of circles. The image below shows the situation: 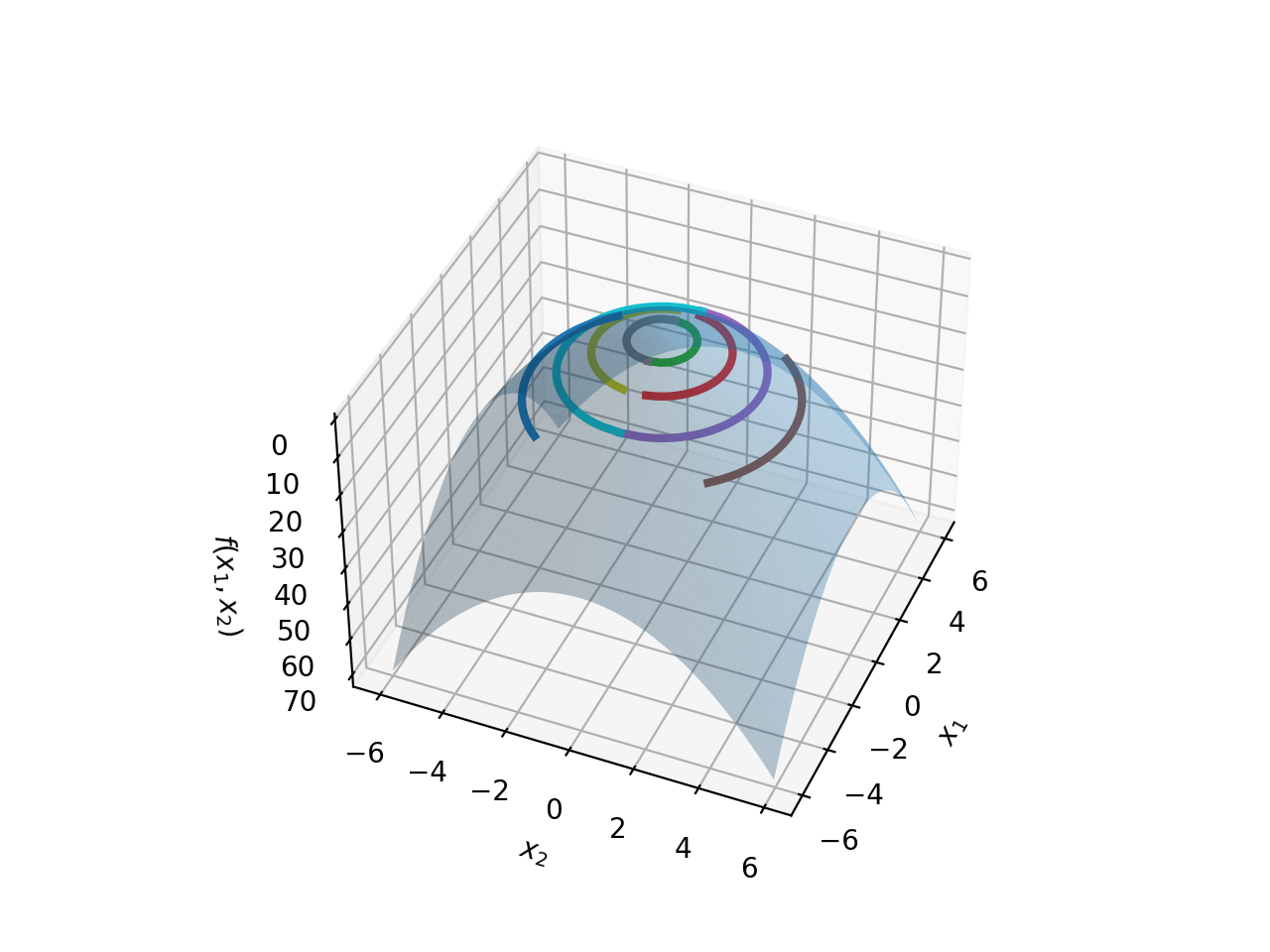 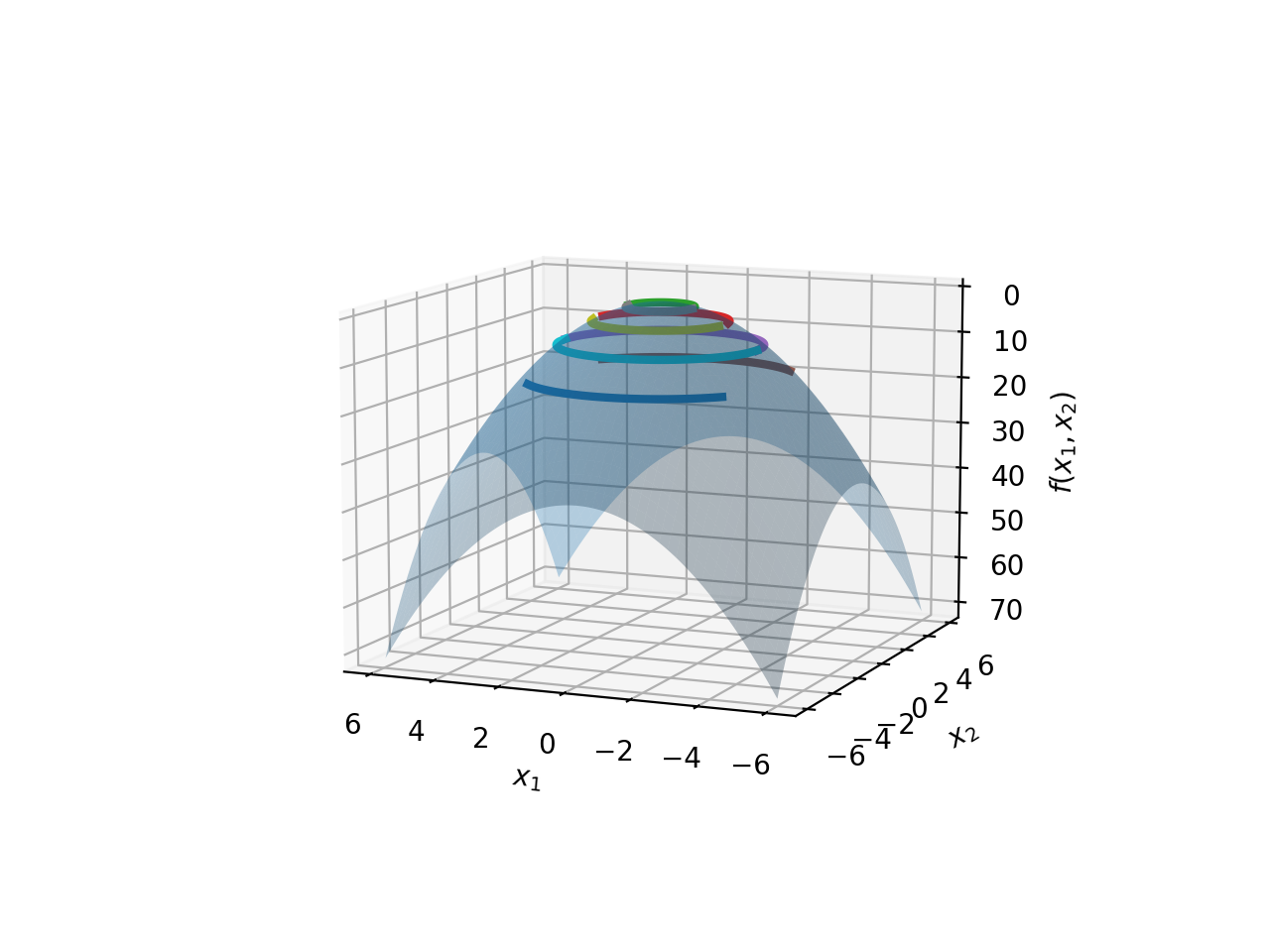 Let’s put Level Sets into action. Let’s take a familiar exercise, and apply our understanding of level sets to it, that will allow us to interpret the solution with our new-found knowledge.

However this is not the tangent line. If you consider the actual line (actually, one of the lines, you can get infinitely many lines by translation, we discuss this below) this normal vector represents, that is: \(\mathbf{y-6x=0}\) which passes through the origin, and is definitely not tangent to the curve, as shown in the picture below. It has the correct slope, but it is displaced. 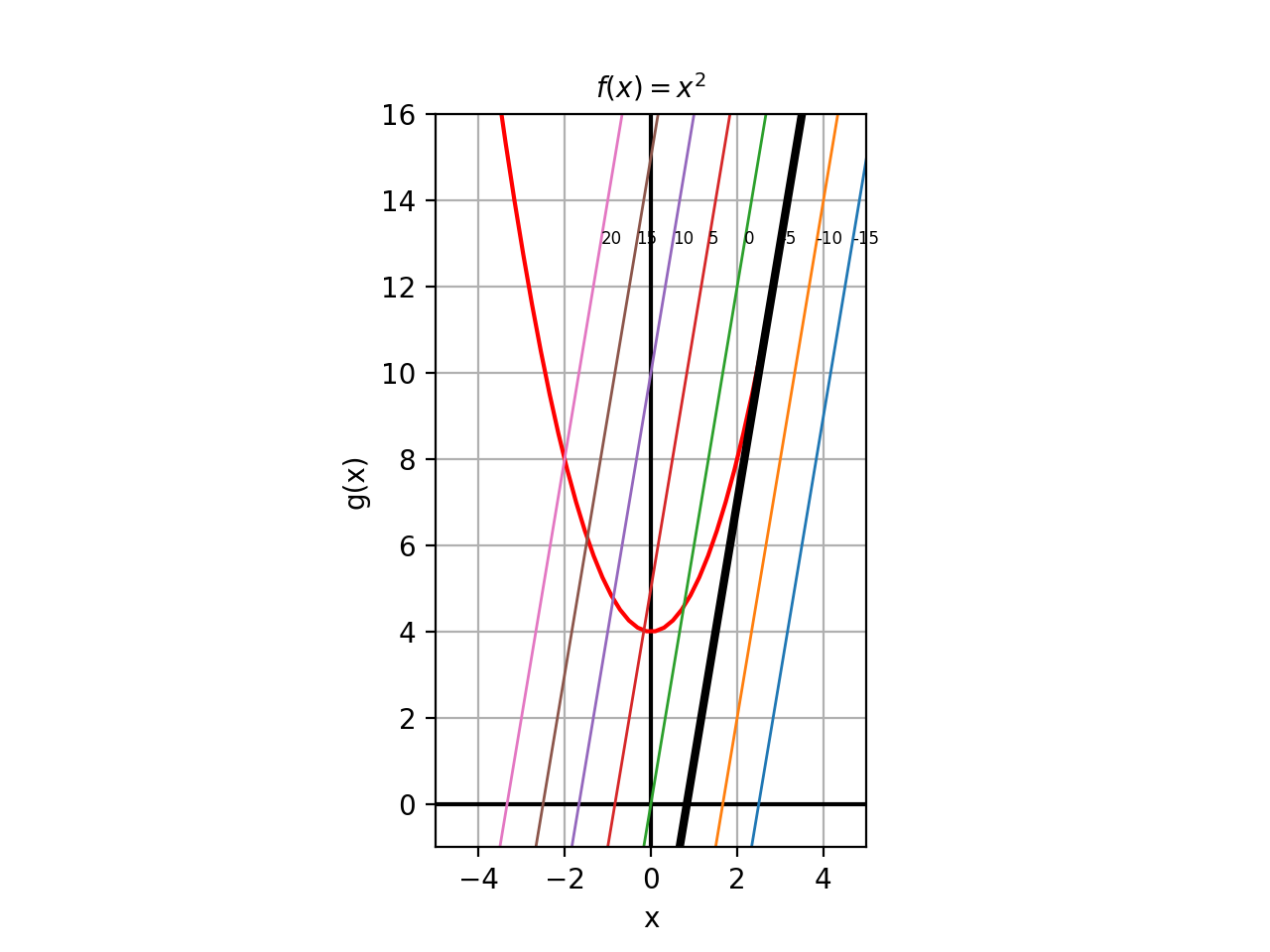 Plugging in -5 as the level set value for the function gives us \(\mathbf{y-6x=-5}\), which is the correct tangent line. This line is shown in bold in the plot above.

Well, \(y\) does not depend upon anything other than \(x\), so taking the partial is the same as your normal derivative, which is \(\frac{dy}{dx}=6\). Substituting this back into the above identity, we get:

This confirms the previous calculation.

This second line of finding out a tangent line will prove more useful, when we extend the discussion to tangent spaces in higher dimensions. Keep this at the back of your mind.

There is one more point that I want to make which will be important as it will be restated in the proof for points constrained to a manifold. The function \(g(x)=y=x^2\) represents \(y\) in terms of \(x\). The differential of this function is obviously \(Dg(x)\).

I will touch on Jacobians lightly because a significant part of what is to come in this article, will differentiate functions with respect to vectors, very often. Jacobians are the application of partial derivatives on multiple vector-valued functions, i.e., they accept vectors as inputs. To make this more concrete, and show the most general case for matrices, we take \(m\) functions, each taking as input an n-dimensional vector. Thus, our initial matrix will be an \(m \times n\) matrix, like so:

Taking the Jacobian of \(F\) is partial differentiation of \(f_i\)with respect to each \(x_i\), and repeating this for all functions in the matrix.

The exercise in the section on Level Sets leads directly from the one-dimensional case to a discussion on Tangent Spaces in higher dimensions. Remember the equation to find the tangent space in one dimension, where we represented one variable in terms of the other? I reproduce it below for reference:

Here, we have simply replaced the concrete values with \((x_0,y_0)\). This is usually referred to as the parametric form of a linear function. It tells you how much \(y\) when you change \(x\) by a certain value. Specifically, it also tells you how much \(y\) changes by, when you change \(x\) by 1.This value is also, unsurprisingly, the slope of the linear function, represented here as \(\frac{\partial y}{\partial x}\). Any vector on this linear function can be represented as \(\begin{bmatrix}1 \\ \frac{dy}{dx}\end{bmatrix}.t\)

Now, consider any equation of three variables. As an example:

We have essentially moved up one dimension from the previous example, where one variable is now expressed in terms of two variables, instead of one. If we wish to find the tangent space for this, we can use the same concept, except that this time partial differentiation will make sense, since you have two dependent variables, so you take the partial derivative for each of them separately. So, we can write:

This is a single linear equation. We will have more to say about linearity in nonlinear curves in another article. Now we extend this to multiple equations. Before we do that though, let’s consider a simple motivating example to make the intuition about independent and dependent variables in a linear system of equations, more solid.

What is the solution to this set of equations? Let’s use the row reduction technique to find the pivots. We first write out the system of linear equations as a matrix.

You will have also noticed that the final result is the parametric form of a line in 3D space. This is not surprising, because the solution represents the intersection of two planes. 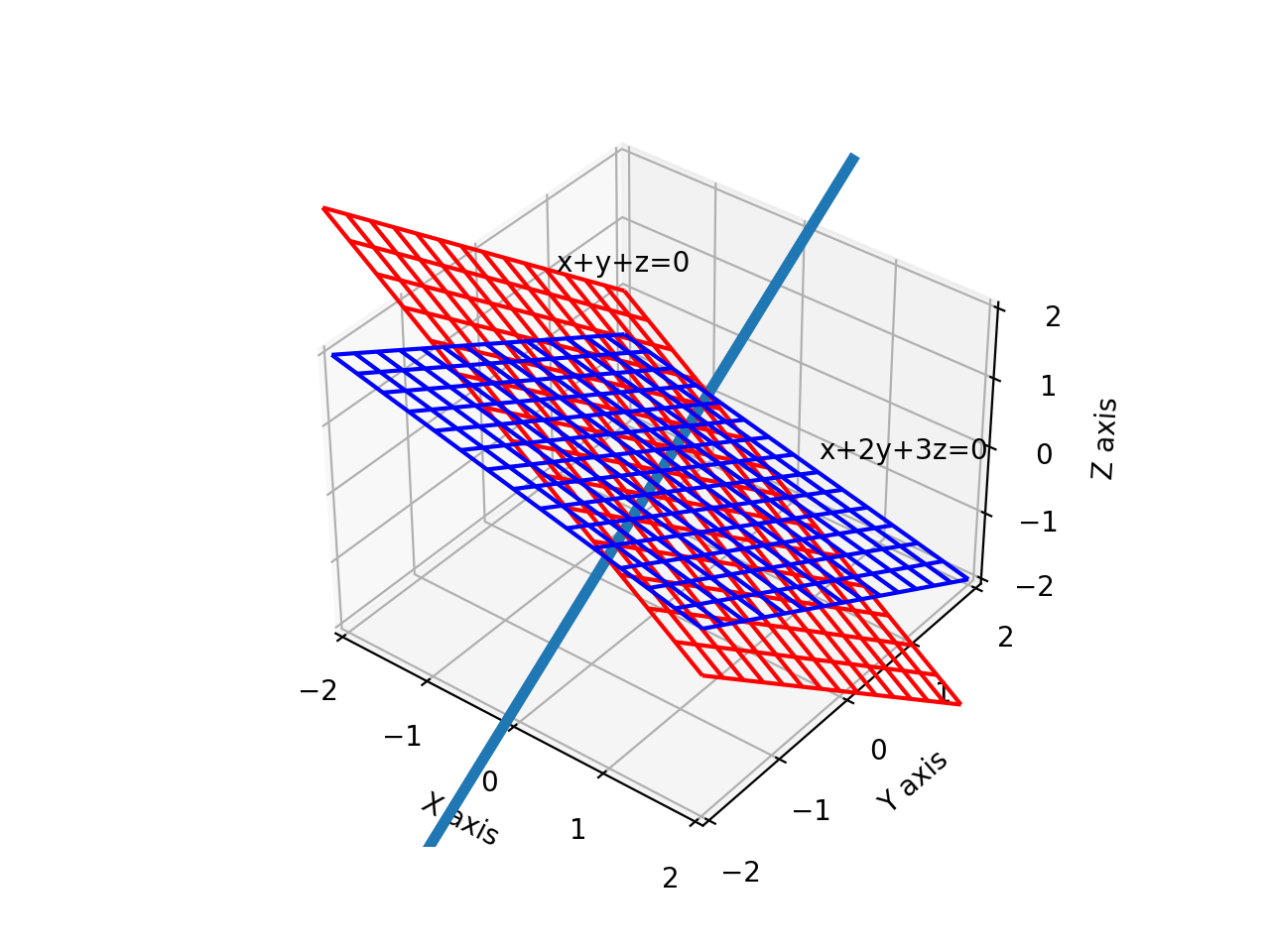 We can say that this line (\(x=z,y=-2z\)) is a manifold. The definition of a manifold involves several conditions that need to be satisfied, and they are related to ideas about differentiability and local linearity. We will visualise some of those ideas in the next article. The important thing to connect this material with Machine Learning is that an optimisation problem defines a set of constraints. These constraints limit the area where an optimal solution can exist. These constraints are what we represent by \(n-k\) equations. Note that, in the usual case of optimisation, we will have more variables than equations, i.e., \(n>k\). In this context, we may call the manifold, a constraint manifold.

Thus, if we have a system of \(\mathbf{n-k}\) equations, assuming this linear system has maximum possible rank, i.e., all the column vectors are linearly independent, we will have \(n-k\) pivots. This implies that there exist \(\mathbf{k}\) free variables (parameters) which can be used to express the remaining \(n-k\) dependent variables.

The matrix of these functions can be represented as:

Then, we may extend our single-function expression of the slope, and write as below:

So it is with this complicated-looking expression: it represents the tangent space of a manifold which is defined by \(n-k\) equations.

One question that will inevitably arise is: how does this set of linear equations ultimately motivate optimisation on complex manifolds? The Implicit Function Theorem answers this question, and is the jumping-off point for the next post on Vector Calculus.