Intuitions about the Implicit Function Theorem

We discussed the Implicit Function Theorem at the end of the article on Lagrange Multipliers, with some hand-waving to justify the linear behaviour on manifolds in arbitrary \(\mathbb{R}^N\).

Monotonicity in One Dimension

In this case, the inverse is pretty easy to determine, it is \(f^{-1}(x)=\frac{x}{2}\). The function \(f\) is thus a mapping from \(\mathbb{R} \rightarrow \mathbb{R}\). Let us ask the question while we are still dealing with very simple functions: under what conoditions does a function not have an inverse?

Obviously, \(f(x)\) collapses every \(x\) into the zero vector, and is thus not invertible. Correspondingly, the function does not have an inverse. Some intuition is developed about invertibility in Assorted Intuitions about Matrics.

This implies an important point, it is not necessary for all \(x\) to have the same output. Even if a single non-zero vector \(x\) folds into zero, then our function cannot be invertible. For this to happen, a function must continuously either keep increasing or decreasing: it cannot increase for a while, then decrease again, because that automatically implies that the output can be the same for two (or more) different inputs (implying that you cannot recover the input uniquely from a given output).

A function which always either only increases, or only decreases, is called a monotonic function.

Monotonic functions have the property that their derivative is always either always positive or always negative throughout the domain. This property is evident, when you take the derivative of the function \(g(x)=2x\), which is \(\frac{dg(x)}{dx}=2\).

This will come in handy when we move to higher dimensions.

Let’s look at another well-known function, the sine curve.

This also leads us to an important practice: that of explicitly defining the region of the domain of the function where it is monotonic. In most cases, excluding the problematic areas of the domain, allows us to apply stricter conditions to a local area of a function, which would not be possible if the function was considered at a global scale.

What if we wish to extend this to the two-dimensional case? We now have a function \(F:\mathbb{R}^2 \rightarrow \mathbb{R}^2\). I said “a function”, but it is actually a vector of two functions. An elementary function returns a single scalar value, and to get two values (remember, \(\mathbb{R}^2\)) for our output vector, we need two functions. Let us write this as:

where \(X=(x_1,x_2)\). I have simply rewritten the functions in matrix form above. What is the inverse of this function? We can simply compute the inverse of this matrix to get the answer. I won’t show the steps here (I did this using augmented matrix Gaussian Elimination), but you can verify yourself that the inverse \(F^{-1}\) is:

This can be extended to all higher dimensions, obviously.

Let us repeat the same question as in the one-dimensional case: when is the function \(F\) not invertible? We need to make our definition a little more sophisticated in the case of multivariable functions; the new requirement is that all its partial derivatives always be invertible. Stated this way, this implies that the the gradient of the function (Jacobian) \(\nabla F\) be invertible over the entire region of interest.

Briefly, we’re looking at \(n\) equations with \(n\) unknowns, with all linearly independent column vectors. Linear independence is a necessary condition for invertibility.

We are now ready to state the Inverse Function Theorem (well, the important part).

The Inverse Function Theorem states that:

The theorem also gives us information about what the derivative of the inverse function, but we’ll not delve into that aspect for the moment. Any textbook on Vector Calculus should have the relevant results.

This is a very informal definition of the Inverse Function Theorem, but it conveys the most important part, namely: if the derivative of a function is invertible in some neighbourhood of \(x_0\), there exists an inverse of the function itself in that neighbourhood.

The reason we stress a lot on the word neighbourhood is that a lot of functions are not necessarily continuously differentiable, especially for nonlinear functions. Linear functions look the same as their derivatives at every point, which is why we didn’t need to worry about taking the derivative of \(f(x)=2x\) in our initial example.

The Inverse Function Theorem obviously applies to linear functions, but its real value lies in applying to nonlinear functions, where the neighbourhood is taken to be infinitesmal, which then leads us to the definition of the manifold, which we have talked about in Vector Calculus: Lagrange Multipliers, Manifolds, and the Implicit Function Theorem.

What can we say about systems of functions which have \(n\) unknowns, but less than \(n\) equations? The Implicit Function Theorem gives us an answer to this; think of it as a more general version of the Inverse Function Theorem.

Much of the mechanics implied by this theorem is covered in Vector Calculus: Lagrange Multipliers, Manifolds, and the Implicit Function Theorem. However, here we take a big-picture view.

The situation is illustrated below. 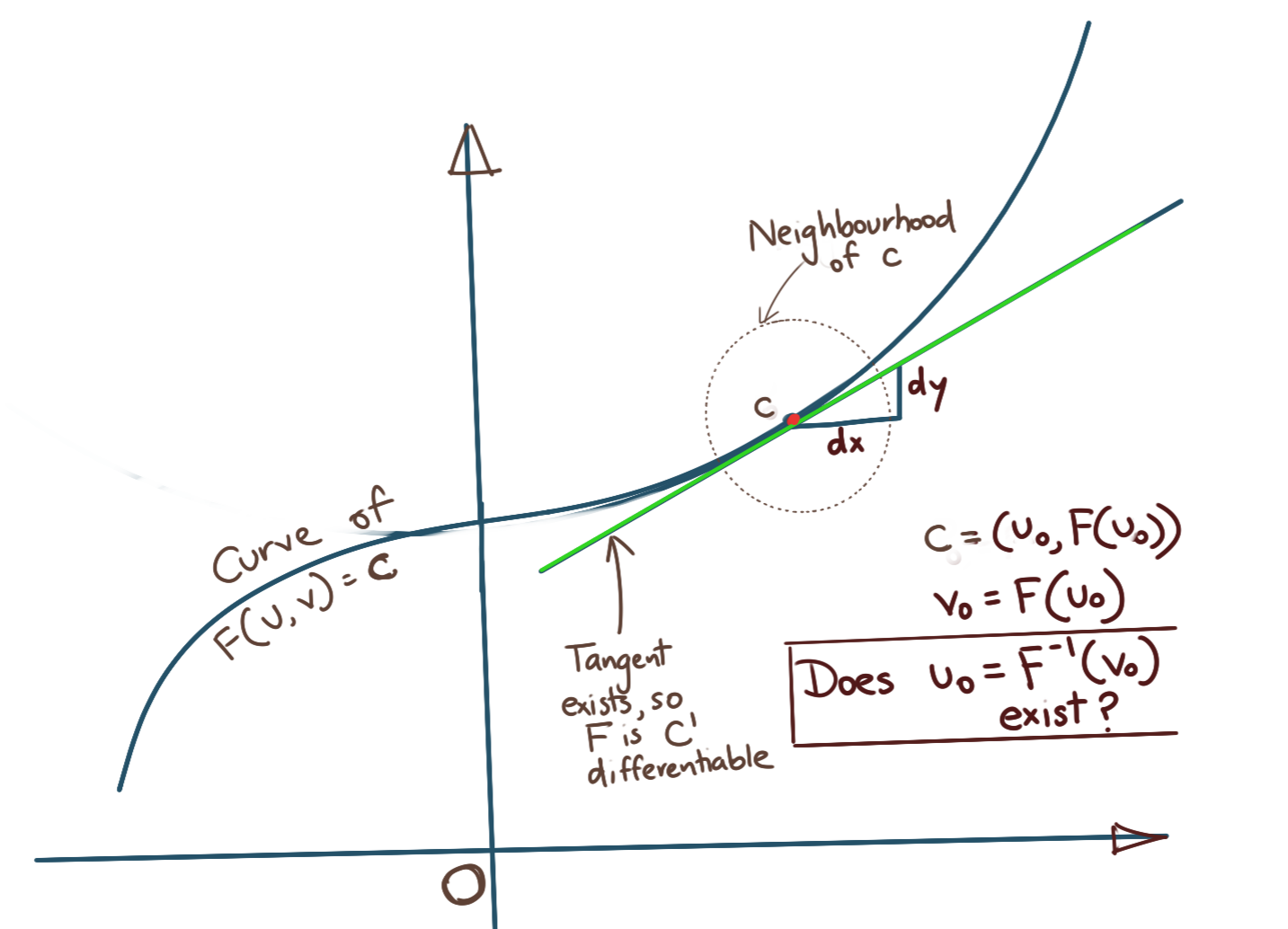 then, the following holds true:

Note on the Derivative Matrix

Let us look at the matrix \(L\) defined above. Here, we have added padded the derivatives with the zero matrix and an identity matrix to make the whole matrix \(L\), square.

For simple linear surfaces, simply finding the inverse of the system of linear equations is enough, since as I noted, the gradient vector is the same as the surfce normal globally, but that is not true for “lumpy” functions globally. It is true for a neighbourhood \(x_0\). But what is the size of this neighbourhood such that the derivative approximates the actual function reasonably well?

Put another way, what is the size of the neighbourhood, where the first derivative does not change too fast for it to be useful in approximating the actual function? This requires the derivative satisfying the Lipschitz Condition, which is a way of putting a strong guarantee on continuous differentiability.

We will not go into the details of how this condition is satisfied, but only state that calculating a metric associated with this condition, requires us to compute \(L^{-1}\).

where \(A\) and \(B\) are invertible, but \(C\) need not be. To see why this results in \(L\) being invertible, see Intuitions around Matrix Multiplications.