This article expands the groundwork laid in Kernel Functions: Functional Analysis and Linear Algebra Preliminaries to discuss some more properties and proofs for some of the properties of functions that we will use in future discussions on Kernel Methods in Machine Learning, including (but not restricted to) the construction of Reproducing Kernel Hilbert Spaces.

However, in this article, we will expound more fundamentals concepts to build up our intuition. Thus, this (and some other articles) will serve as a “knowledge base” for applicable results in Real and Functional Analysis, and will be referenced in more future posts.

There is some more (unorganised) material in Functional and Real Analysis Notes which this post will also refer to.

We will discuss the following topics:

For the purposes of discussion, we may consider Operators as equivalent to Linear Transformations (there are nonlinear operators too, but that is outside the scope of this discussion). The term “operator” is used when these transformations are applied to a wide variety of inputs, usually beyond simple geometric notions of \(\mathbb{R}^n\).

In our discussions of applications of Functional Analysis, the most common application of operators will be on functions; but we may think of them as linear transformations under a different name. Note that they are still functions operating on vectors (because the inputs are functions, which are vectors themselves). For the results discussed in this article, we will restrict ourselves to Continuous Linear Operators. 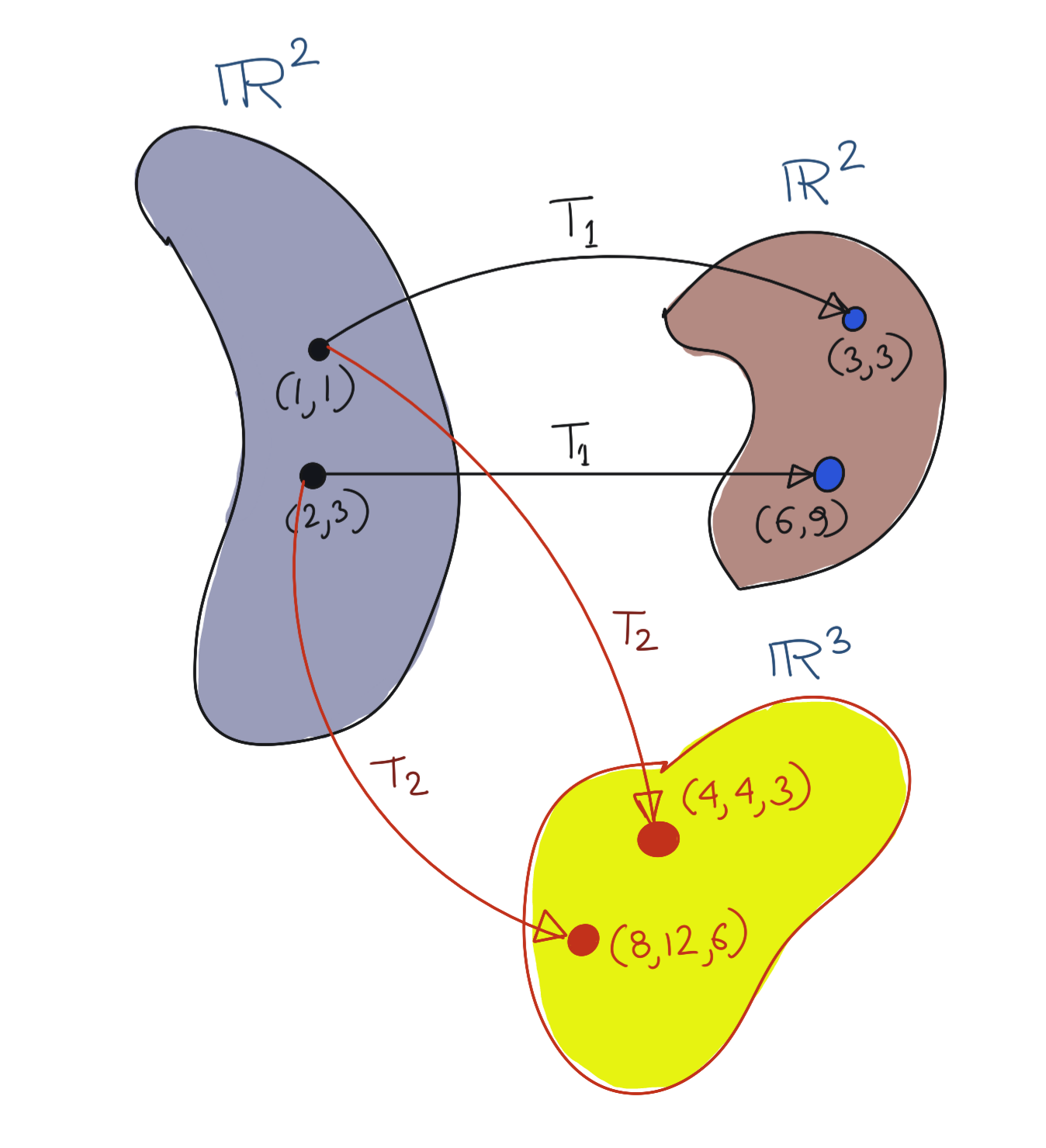 Linear Functionals are functions which map vectors specifically to their field of scalars, usually \(\mathbb{R}\) or \(\mathbb{C}\). 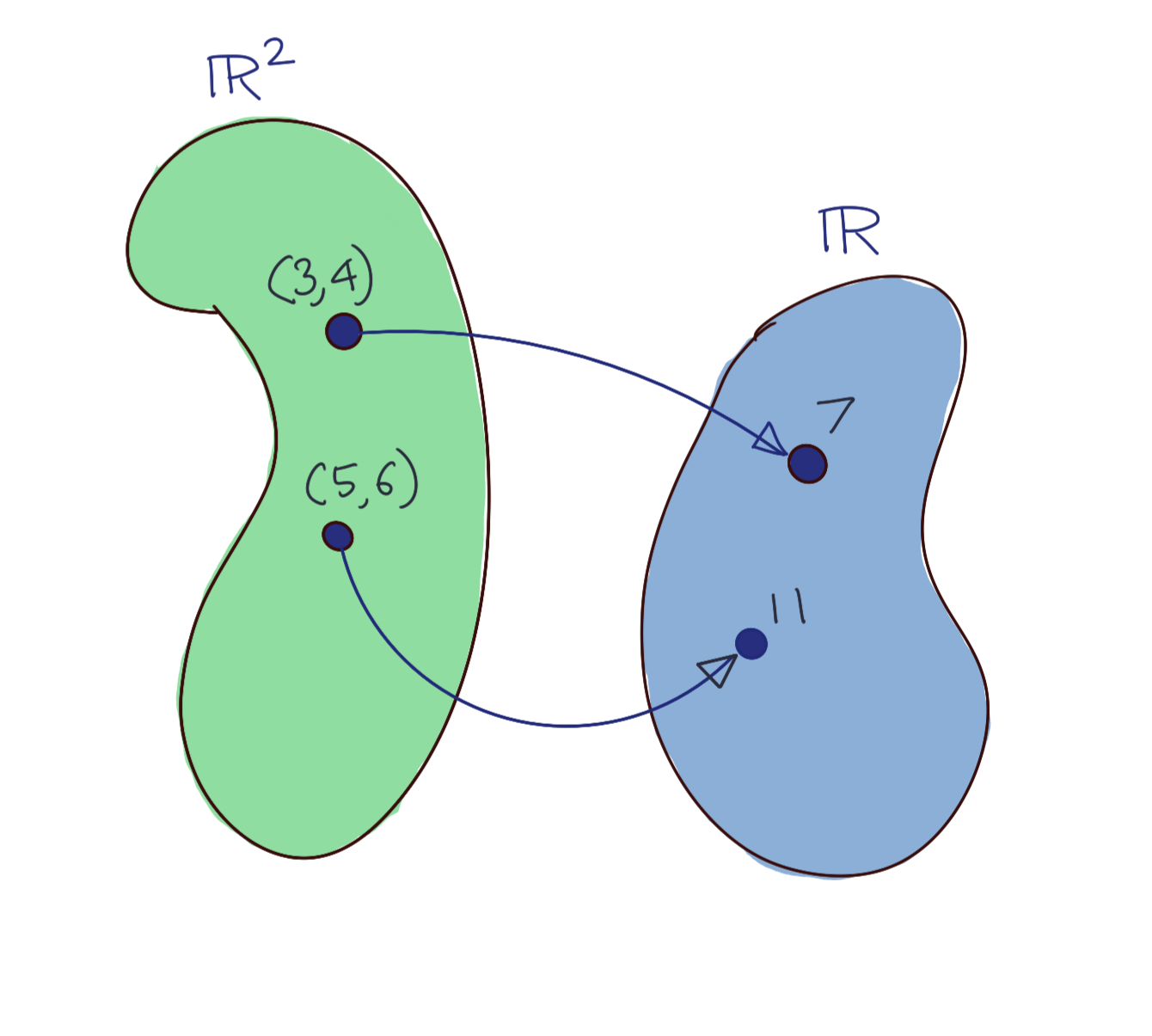 By the way, Linear Functionals are also Operators because they are also linear transformations; it is just that they always map to a vector space over the field of scalars (specifically the field over which the linear functional was defined on).

We will discuss the continuity aspect enjoyed by Continuous Linear Operators in an upcoming section.

We look at a couple of very simple examples of what does and does not constitute Linear Functionals.

Example of a Linear Functional

Non-Example of a Linear Functional

As a non-example, consider \(f(x)=2x+3\). Note that this is not a linear transformation in \(R^n\); one intuitive reason is that there is no matrix you can define which can reproduce this operation when applied to any \(x\in\mathbb{R}\). This is despite the fact that this is a continuous function.

It is also not a Linear Functional because it does not follow one of the properties, as follows:

Please note that this definition of linearity is not one that non-mathematicians are used to, since you’d normally look at an expression \(2x+3\) and conclude that it was “linear” in the sense that it expresses a polynomial of degree one, or alternatively, its graph is a straight line (or a plane in \(\mathbb{R}^3\), or an equivalent hyperplane in higher dimensions).

Before discussing the norm of a function, let’s talk of the family of norms which include the natural concept of the Euclidean norm, namely the \(L^p\) norms.

The definition of the Euclidean distance metric falls out from the above definition immediately for \(p=2\). Interestingly, we see that other norms are possible. Say we put \(p=1\) above. Then we get the \(L^1\) norm defined as:

Let us investigate the shapes traced by these norms to build a little geometric intuition, in \(\mathbb{R}^2\). To do this, we will trace the locii of points for which \(\|x\|_p=1\). That is, we will look at the locii for which the following norm equalities are satisfied. 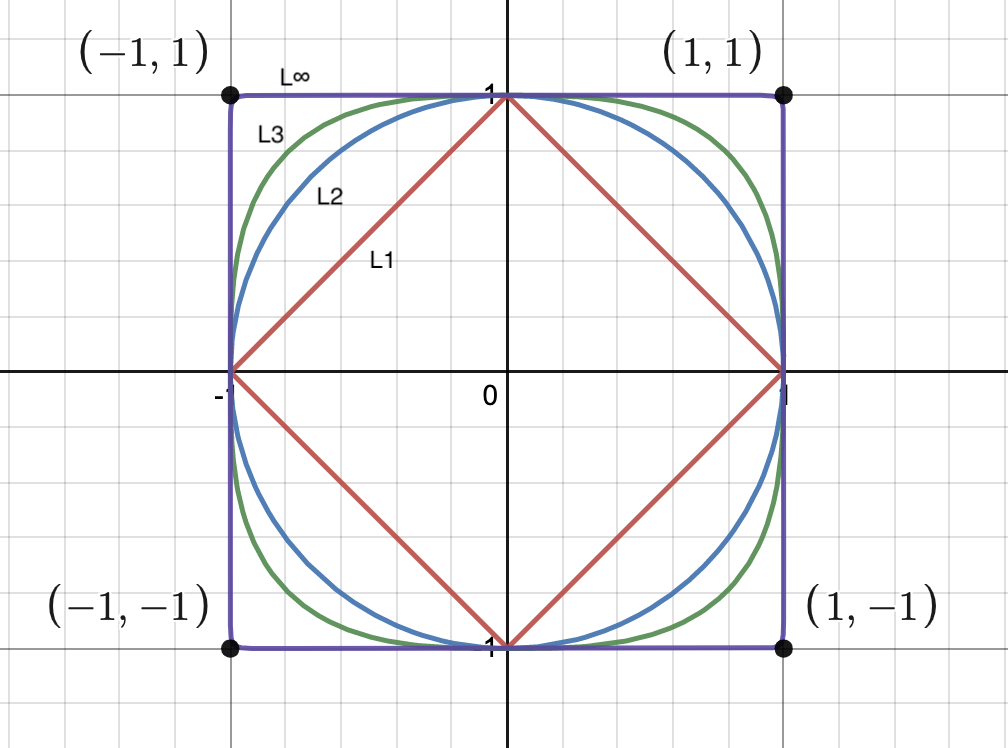 As you can see, the \(L^2\) norm is the familiar unit circle given by \(x^2+y^2=1\). The other norms, however, look a little strange. However, this goes to show that the distance metric is a choice we actively make when building a metric space. Higher-powered \(L^p\) norms become “squarer” in shape.

It can be proven that:

Intuitively, we can think of this definition like this: the magnitude of the largest vector component overpowers all other vector components, when it is raised to infinity.

With that discussion of norms, it should be clear now that different norms can be assigned to vector spaces of functions as well. The important point two remember is that functions have an infinite number of dimensions. Two of the common ones are as follows: 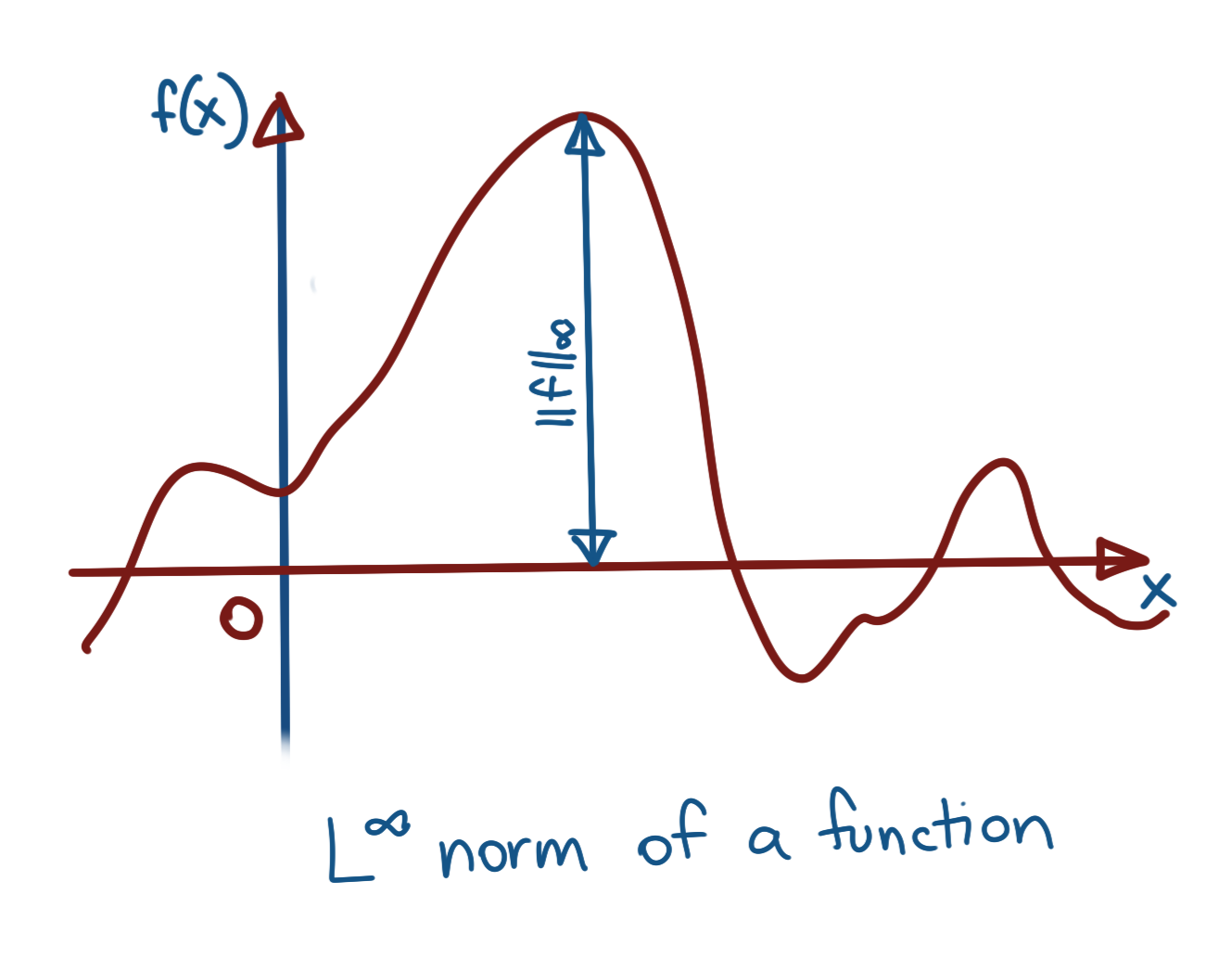 Sup Norm of a Function

The Operator Norm is not really a new way of describing a norm; it still depends upon the norms defined in vector spaces for the actual calculation. An operator norm is a measure of how much the operator modifies the norm of the original input vector.

The operator norm is then defined as the maximum possible value of this ratio.

The only problem with the above is that \(\|T\|\) will not be defined for \(x=0\). Thus, we conveniently exclude 0 from the definition, to give us the following:

There is a simpler way of expressing this: if we constrain \(x\) to always have a norm of 1, i.e., a unit vector, the denominator in the above expression becomes 1, so we can rewrite the operator norm as:

Sets don’t come naturally equipped with a way to measure “distances” between their elements. Some sets might have intuitive notions of what it means by distance between two elements in it, like n-dimensional Euclidean space (\(\mathbb{R}^n\)), but those intuitive metrics are not the only possible metrics available for those sets.

Continuity for a function can be defined as follows:

Another equivalent definition for continuity is more useful:

where \(d(\bullet, \bullet)\) is the distance metric defined for the metric space under discussion. However, the formulation that is used most commonly in proofs (in Real Analysis, etc.), is the \(\epsilon-\delta\) formulation. Mathematically, for a function \(f:X\rightarrow Y\), this is:

The two definitions above are equivalent, since a metric can be induced by a norm, and we will usually describe normed spaces. The \(d_X\), \(d_Y\), \(\|\bullet\|_X\), and \(\|\bullet\|_Y\) are there to make explicit the fact the norms (and by extension, the distance metric) might be different in the domain and the codomain.

Generally speaking, a mapping (a function is a mapping) is continuous if it preserves convergence in the codomain of the mapping. See Functional and Real Analysis Notes for more discussion on convergence.

Informally, this means that if there were two points \(x_1\), \(x_2\) in the domain \(X\) which were close to each other (closeness defined by the distance metric induced by the norm, or transitively, the inner product in \(X\): see Function Norms), then the corresponding mapped points \(f(x_1)\), \(f(x_2)\) in the codomain are also close to each other (closeness defined by some distance metric in the codomain).

Informally, the Riesz Representation Theorem states that every continuous (and therefore, bounded) linear functional \(f\) applied on a vector \(x\) in a vector space \(X\) is equivalent to the inner product of a unique vector (corresponding to \(f\)) with \(x\).

Mercer’s Theorem is the functional (read infinite-dimensional) version of the eigendecomposition of a matrix. We present the equivalent forms without proof; we may tackle it in a more theoretical Functional Analysis post.

We talked about eigenvalues and eigenvectors briefly in Quadratic Optimisation using Principal Component Analysis as Motivation: Part Two, where we saw that symmetric matrices have orthogonal eigenvectors. There is also another property they enjoy in that all the eigenvalues are real-valued.

Here is a quick refresher proof on why symmetric matrices have orthogonal eigenvectors. Assume a symmetric matrix \(A=A^T\). Pick any two of its eigenvectors and corresponding eigenvalues, say \((\lambda_1, v_1)\) and \((\lambda_2, v_2)\), with the reasonable assumption that \(\lambda_1\neq\lambda_2\). Then we can write the following chain of identities:

implying that all eigenvectors of a symmetric matrix are orthogonal to each other.

There will be a deeper delve into eigenvectors in a succeeding post.

The infinite-dimensional version of an eigenvector is predictably called an eigenfunction. Let’s look at the finite-dimensional case to establish a direct visual equivalence with the statement of Mercer’s Theorem.

We take the case of a symmetric matrix which has strictly orthogonal real-valued eigenvectors, and then multiply out the matrices to see what \(A\) looks like.

Then, expanding, we get:

The above is simply the statement of the Spectral Theory of Matrices.

Mercer’s Theorem is an extension of this to an infinite-dimensional matrix, where the eigenvectors are replaced by eigenfunctions (remember, functions are vectors too), and the requirement for a symmetric matrix is replaced by a positive semi-definite function \(\kappa(x,y)\), characterised by the positive semi-definiteness of the Gram Matrix as noted in the Inner Product and the Gram Matrix section in Kernel Functions: Functional Analysis and Linear Algebra Preliminaries.

where \(\kappa(x,y)\) is a positive semi-definite function and \(\psi_i(\bullet)\) is the \(i\)th eigenfunction. Note that this implies that there are an infinite number of eigenfunctions.